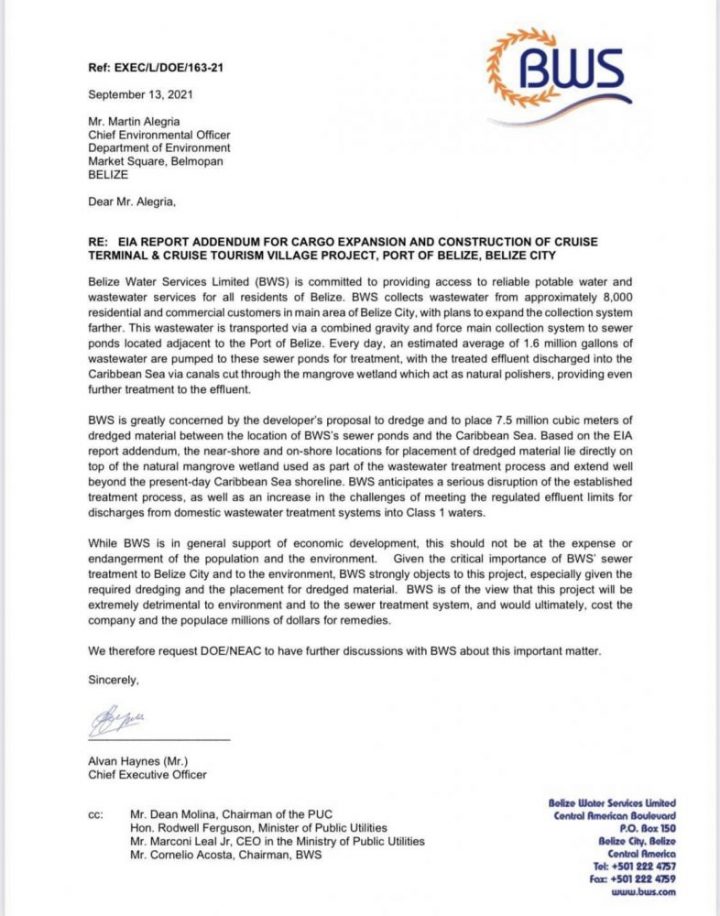 By Aaron Humes: Waterloo Investment Holdings’ plan to dredge near the Port of Belize and dump about 7.5 million cubic meters of material into several sites off and near the coast as part of its proposed cruise port investment has had many detractors – and this week gained another.

Belize Water Services Limited (BWS) says it is strongly objecting to the project, arguing that it will impact its natural sewer ponds located in the Port Loyola area of Belize City, where it treats the water it initially produces for distribution to residents.

CEO Alvan Haynes wrote to Chief Environmental Officer Martin Alegria on September 13, explaining that BWS collects an average 1.6 million gallons of wastewater daily from its 8,000 customers in the Old Capital and transports it to this area for treatment and eventual disposal in the Caribbean Sea through natural canals cut through the mangrove wetland.

Haynes states that a study of the addendum to the Environmental Impact Assessment (EIA) for the project finds that the proposed on-shore and near-shore dumping sites are right on top of the wetland and will thus disrupt its process.

The company says if the project goes through, it will cost millions in injury to its treatment program and to the environmental complexion of the area. It invites the Department of the Environment (DOE) to discuss the issue further.

Assuming the Government is backing the development, detractors have called on Belizeans to attend virtual public consultations scheduled on September twenty-three at four o’clock in the afternoon.

Several other groups including Oceana, the World Wildlife Fund, and the Belize Audubon Society wrote jointly to Prime Minister John Briceno opposing the continuation of the project, citing many environmental concerns including the dumping of the toxic material.

We will keep following the story.