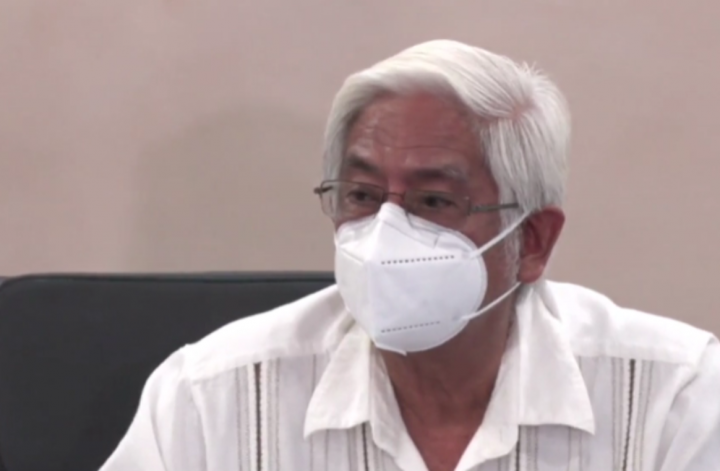 By Aaron Humes: While the risk of infection is not zero, it is hoped, according to the medical team, that it can be reduced significantly.

An obstetrician/gynecologist by trade, Dr. Marcelo Coyi also has a degree in public health.

He cites the reproductive or R number for the original version of the virus at three, I.e. one infected person in turn infects three persons, compared to four for HIV and two for regular influenza.

In the case of the Delta variant, the R number varies between five and nine by study, measures by the daily infection rate and hospitalization and death rates as well as the infection period of the disease, as well as type of spread and contact rate.

The target is to keep the R number below one, I.e. one person infecting another.

Dr. Coyi explained that the droplets of saliva expelled by coughing, sneezing or even talking are the majority of instances of spread of the disease as opposed to contact with an infected surface.

On mask use, Dr. Coyi says not using the mask while eating out or drinking in a restaurant and bar and especially when seated close together, is risky. The more time in contact with a source of infection, especially in enclosed areas, the greater the risk.

Finally on the issue of vaccination, Dr. Coyi called it more of an investment in the future. What is needed now is to limit movement to reduce the rate of reproduction to where it was in late March and early April. He noted that statistics citing Israel’s death rate from vaccinated persons takes into account other factors. It is important to have those who have taken one dose to collect their second to be fully protected and avert catastrophe.