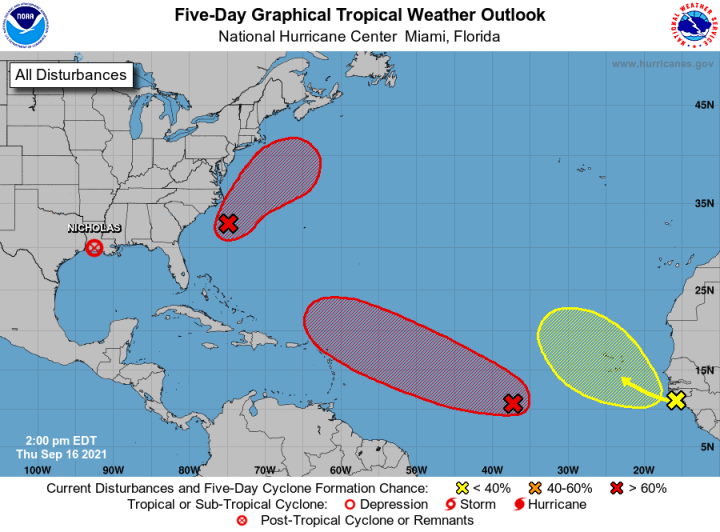 Benjamin Flowers: The United States National Hurricane Center (NHC) said today that Post-Tropical Storm Nicholas is still a threat to some areas in the southern United States, while three other disturbances are being monitored elsewhere.

The Weather Prediction Center is issuing advisories on Post-Tropical Cyclone Nicholas, located near the central coast of Louisiana.

The first disturbance being monitored is a tropical wave and broad area of low pressure located a little more than 900 miles west-southwest of the Cabo Verde Islands. the system which has become less organized yesterday is still causing showers and thunderstorms in its area as it moves westward to northwestward across the tropical Atlantic. Forecasters say it is likely to become a tropical depression over the weekend. The system has a 70 percent chance of formation within the next 48 hours and an 80 percent chance of formation within the next five days.

The second disturbance is a broad area of low pressure located a couple of hundred miles south-southeast of the Outer Banks of North Carolina are beginning to show some signs of organization, which recent satellite wind data suggest lacks a well-defined center. An Air Force Reserve reconnaissance aircraft has just begun its investigation of the disturbance.

“Environmental conditions are expected to be conducive to support additional development, and a tropical depression is likely to form during the next day or so while the system moves northward to north-northeastward off the southeast and mid-Atlantic U.S. coasts,” the NAC said. “Regardless of development, this system could bring high surf to portions of the southeast and mid-Atlantic U.S. coasts later this week and this weekend. Additional information on this system, including gale warnings, can be found in High Seas Forecasts issued by the NOAA Ocean Prediction Center. * Formation chance through 48 hours…high…70 percent. * Formation chance through 5 days…high…70 percent.”

Meanwhile, disorganized cloudiness and thunderstorms over the far eastern tropical Atlantic are associated with a tropical wave along the west coast of Africa. Forecasters say that the environmental conditions will only be marginally conducive, and development, if any, of the system should be slow to occur over the next few days while the system moves west-northwestward to northwestward over the far eastern Atlantic. * Formation chance through 48 hours…low…10 percent. * Formation chance through 5 days…low…20 percent.