Minister’s son who got Taiwan ICDF scholarship defends selection: “My dad did not help me in anything” 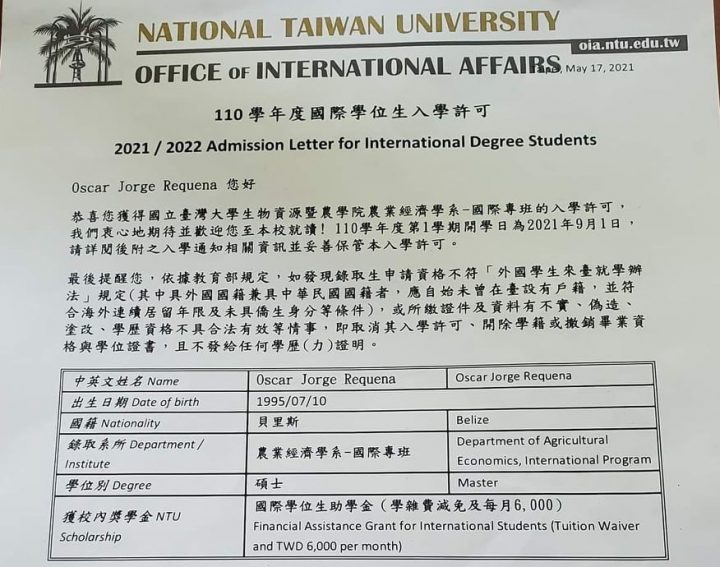 By Aaron Humes: Political detractors of the current administration have tried to paint Minister of National Defense and Border Security Florencio Marin, Jr., and Minister of Labour, Local Government and Rural Transformation, Oscar Requeña, as hypocrites for allowing their scions to apply for scholarships with their Government positions. The former’s daughter and the latter’s son are two of this year’s 30 scholarship recipients.

But at least one has hit back, saying he did not take advantage of his father’s position to gain for himself.

Oscar Requeña, Jr., wrote a lengthy Facebook post in which he pointed out that he applied after working for 2 ½ years for experience, and that he paid personally for his application, which resulted in a grant of tuition waiver and a grant of 6 thousand Taiwanese dollars per month. It was the scholarship that “most appealed” to him.

The younger Requeña said he confirmed after seeing the result that he was the only applicant accepted from the Toledo District and among a handful of Maya applicants and says he dones’t known why there wasn’t more accepted or if more applied.

Oscar Jr. is studying at the National Taiwan University and has offered himself to assist with applications for future would-be recipients while also encouraging them to work hard and build a good resume and references. But he cannot give up the “insult” the social media post created for something that is difficult and that makes you earn qualification. He concludes, “I can’t help it if you think otherwise, and I can’t help it if I am a Minister’s son.”

We sought comment from the Republic of China (Taiwan)’s embassy, which was accused in the post of making the scholarships “political”. They replied that “Over the years the Taiwan Embassy has worked tireless to promote Taiwan Scholarship Programs. It has cooperated with schools in the West, the North, the South and the Central of Belize to introduce these scholarship programs and furthermore has been on live shows to reach out more Belizean people and welcome everyone to apply for it. The opportunities are open to the public.”

Further, they state that more than 450 Belizeans have benefitted since 2002 when the program began, in various fields “including but not limited to tropical agriculture, civil engineering, public health, trade and commerce, and information technology, areas critical to Belize’s social and economic development.

“It is hoped that graduates return back to Belize with their academic and technical expertise garnered in Taiwan to contribute to Belize’s long-term growth. …The scholarship programs provided by Taiwan play a pivotal role in the Taiwan-Belize bilateral relations, and helping Belizean students go further study to fulfill their aspirations. It is one of the most important missions of Taiwan Embassy in Belize,” the Embassy concluded.