Minister of Tourism on exemptions for new COVID-19 measures: ‘Government needs to balance livelihoods and lives’ 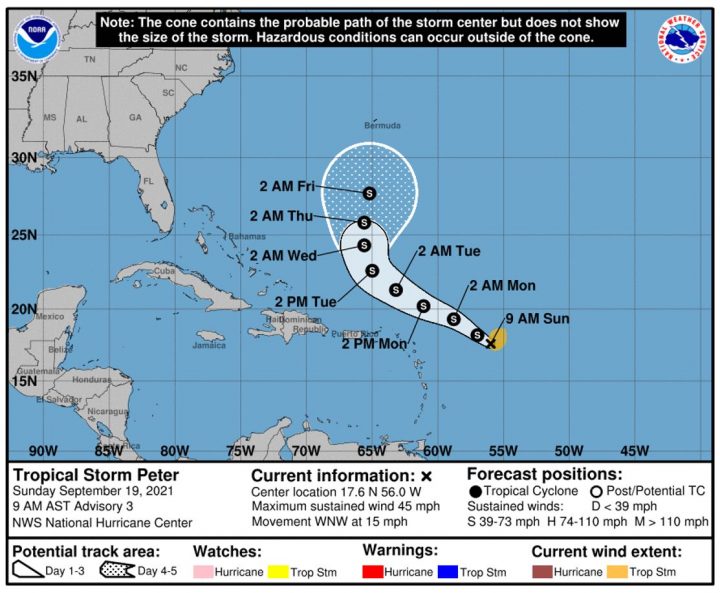 By Benjamin Flowers: The 16th storm of the 2021 Atlantic Hurricane Season formed today and its name is Peter, but a 17th could be close behind, reports Yahoo News.

Peter formed early this morning over the Atlantic Ocean, far east of the Caribbean Sea, and experts expect it to gain strength for at least the next couple of days. As of 8 a.m., Peter was moving west-northwest at about 15 mph with maximum sustained winds of 40 mph, just 1 mph over the minimum threshold for a tropical storm.

Forecasters say that Peter’s southern outer bands could produce 1 to 2 inches of rain across parts of the Virgin Islands, as well as Puerto Rico, from late Sunday through Tuesday. By midweek, upper-level winds are expected to reach the southwestern Atlantic which will decrease Peter’s chances of further development.

Forecasters believe that an easterly cold front is also expected to push Peter away from the U.S., but will bring rough surf, wind, and heavy rain to Bermuda late next week.

Forecasters are also watching Tropical Depression 17, located farther east than Peter, which they believe is likely to form Tropical Storm Rose. Forecasters also say that the presence of cooler waters and stronger upper-level winds that are forecast in the coming days could hinder the depression’s development into the 17th named storm.

“If Rose forms Sunday, 2021 would become only the third hurricane season since 1966 to have had at least 17 named storms by Sept. 19,” Yahoo News reports.

Colorado State University hurricane expert Phil Klotzbach said that the other years are 2020 and 2005. The United States National Hurricane Center (NHC) said that both Peter and Tropical Depression 17 are expected to stay well out to sea, according to the hurricane center. Apart from Rose, the remaining storm names for the season are Sam, Teresa, Victor, and Wanda. There was a former Tropical Storm Odette, which formed Friday off the U.S. coast to the southeast of New Jersey but had become a remnant low by Sunday.

“Just past the halfway point of the hurricane season, which runs through Nov. 30, there have been 16 named storms, six hurricanes, and three major hurricanes,” Yahoo News said.