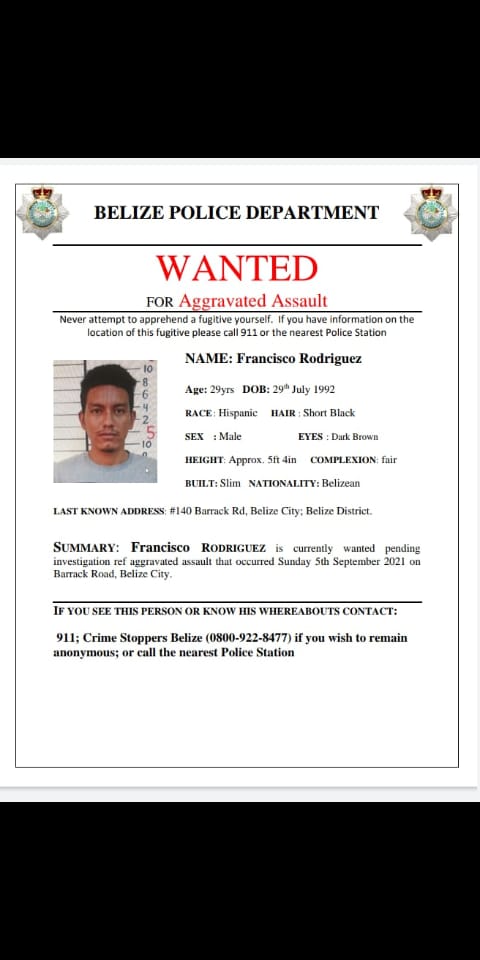 Rodriguez is sought on charges of aggravated assault for an incident in the City on September 5th and in Orange Walk Town on the strength of a warrant for Aggravated Burglary (Non-Appearance at Court).

According to police, Rodriguez was first captured on Sunday, September 26th, 2021 in the Conch Shell Bay Area after he fled from police by running and swimming across the Haulover Creek from North Front street.

As per Department policy respecting human rights, he was taken to the Karl Heusner Memorial Hospital because he appeared to be extremely exhausted and couldn’t stand on his own two feet.

About two hours after being taken to the KHMH, Rodriguez escaped from custody by pulling out his catheter and escaping naked into the streets.

He didn’t get far as police recaptured him in the BTL compound on St. Thomas Street. He was again taken to the KHMH because of bleeding from pulling out his catheter.

However, this morning Tuesday around 2 a.m., the subject again escaped from custody at KHMH and is once again on the run.

This individual is to be considered armed and dangerous and the public is urged to call the police immediately upon seeing him. You can do so at 911, Crimestoppers 0-800-922-8477, or the nearest police station.