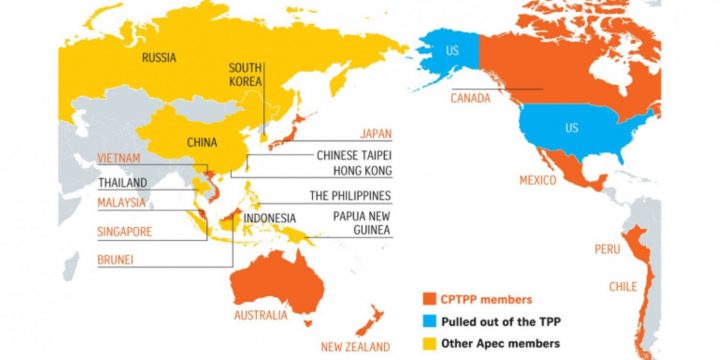 By Rubén Morales Iglesias: China said it will oppose Taiwan’s application to join the Comprehensive and Progressive Agreement for Trans-Pacific Partnership (CPTPP) because Taiwan refuses to accept that it is part of China, said the Associated Press.

China claims Taiwan as part of its territory saying there is only one China, hence it is opposed to Taiwan joining the Pacific Rim free-trade organization, the same reason it opposes Taiwan being admitted into the United Nations.

The Taiwan government led by President Tsai Ing-wen announced on September 23 that it had filed an application to join the CPTPP. China had applied for membership just one week before.

The CPTPP is an 11-member free trade agreement among Australia, Brunei, Canada, Chile, Japan, Malaysia, Mexico, Peru, New Zealand, Singapore, and Vietnam. The agreement came into force in December 2018 after the 11 countries signed it in March 2018.

The United States was a member when it was called the Trans-Pacific Partnership, but that organization never came into force as the US pulled out in 2017.

The United Kingdom applied to become a member in February and in June the CPTPP started the process of admission.

In 1949, when the Communist Party took over China during its civil war, the up-to-then ruling Chinese government retreated to the island of Taiwan claiming to be independent of mainland China. China opposes Taiwan’s independence despite having trade and investment ties.

China’s Foreign Ministry recently said that mainland China is opposed to Taiwan having any official contacts with other countries.