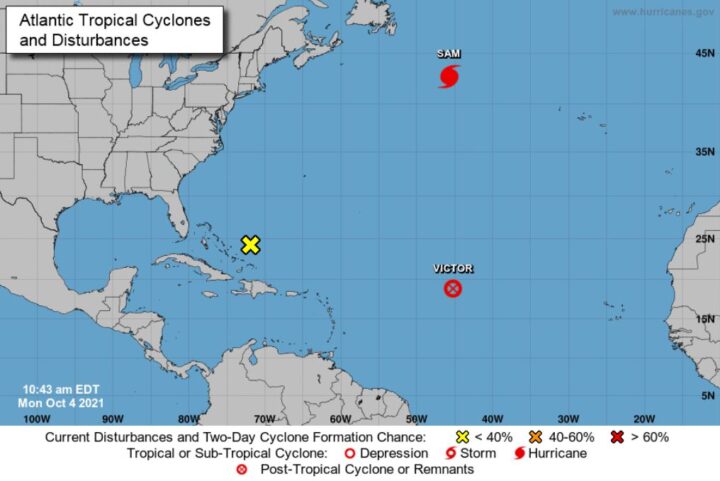 The NHC said “a large area of disorganized cloudiness and showers continues over the southeastern Bahamas and adjacent southwestern Atlantic waters in association with a surface trough” but “any development of this system should be slow to occur while it moves slowly northwestward through the end of this week”.

Meanwhile, Hurricane Sam which has been out in the Atlantic since last week Thursday is now a Category 2 hurricane with 100 miles per hour winds. While it’s expected to gradually weaken during the next few days, it’s expected to “transition into a powerful post-tropical cyclone over the north Atlantic tonight or early Tuesday”.

The NHC said swells will hit the northern Leeward Islands, the Greater Antilles, portions of the Bahamas, and southeastern Newfoundland for the next day or so.

Meanwhile, as reported during the weekend, Victor was disorganized over the eastern tropical Atlantic. Its is now over the central Atlantic and has been downgraded from tropical storm to tropical depression. Its remnants have maximum sustained winds of 30 miles per hour and are moving at 15 miles per hour.