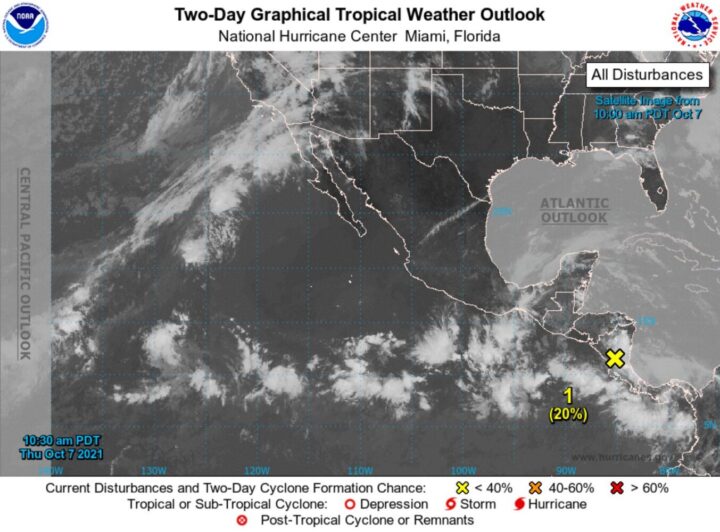 By Rubén Morales Iglesias: The National Meteorological Service of Belize (NMSB) says Belize should expect more rain tonight over northern and coastal areas due to a tropical wave just off the coast which has been causing the moist and unstable conditions.

“Cloudy spells with some periods of rain, showers, and thunderstorms will continue around the country tonight, decreasing to a few by tomorrow morning,” said the NMSB.

Conditions are expected to continue moist and unstable over the next 24 hours as the tropical wave is continuing to produce rain and showers around the country particularly over some coastal and northern areas said the NMSB.

“A few showers or thunderstorms will continue mainly over northern and inland areas Friday afternoon becoming isolated by Saturday morning.”

The United States National Hurricane Center said “A tropical wave continues to produce disorganized cloudiness and thunderstorms over portions of Central America and the adjacent eastern Pacific waters. This system is expected to move westward and emerge over the eastern Pacific Ocean later today or tonight.”

The NSMB said that since 8 am on Thursday, the most rainfall fell near Dangriga and Melinda in the Stann Creek District. Melinda recorded 30.6mm of rain, while the second-highest was recorded at Hattieville in the Belize District with 9.5mm. The Belize City Municipal Airport recorded 8.6mm. Since yesterday, Belize City has reported over 4 inches of rain.

The NMSB said other areas around the country recorded less than 5mm.

The NSMB also reported that “winds continue to be light and variable over the area with an east to northeasterly airflow expected to prevail”.

In addition to the tropical wave affecting the country, there’s a low-pressure system over Panama interacting with the monsoon trough and a stationary front over the central Gulf of Mexico.

The NMSB said small craft at sea should exercise caution near heavy showers and thunderstorms, and flood watch remains in effect for flood-prone and low-lying areas.