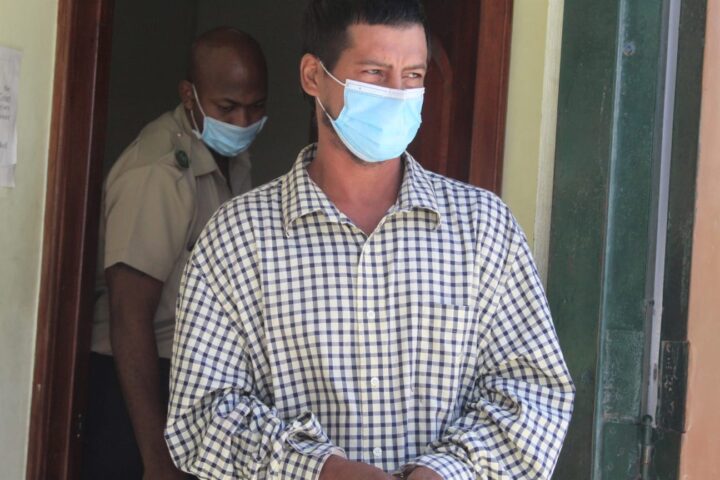 By BBN Staff: Christobal Alexander Arguello, 37, was brought to the Belize City Magistrate’s Court this morning to answer a charge of not wearing a mask properly in public on September 9 but was hit with another charge for allegedly giving police a fake name; however, his legal troubles did not end there as he was accused of committing a burglary on that very same day.

Arguello plead guilty to the two misdemeanor charges before Magistrate Khiana Gordon. It was also not the first time he had been charged with an SOE violation. Magistrate Gordon decided to stand down his matter until the afternoon to deliberate on a suitable sentence but before he could be sentenced on the SOE charges, he was escorted to court #2 and read a charge of burglary.

He is accused of entering a home on East Collet Canal and stealing a phone, two pairs of shoes, and $40 in cash. He plead not guilty to the burglary before Magistrate Aretha Ford and was granted bail in the sum of $3,000 plus one surety of the same; which he was able to meet.

Arguello must not interfere with the victim and must not come within 100 yards of the complainant or his bail will be revoked. His next court date for that matter is set for December 8.

In the afternoon, Magistrate Gordon, showed some leniency and imposed a non-custodial sentence upon him. He was fined $150 plus a $5 cost of court for the mischievous act of giving police a false name and $500 for failure to properly wear a face mask in public. He has until November 11 to pay the fine for the mischievous act or 1 month in jail in default of payment and until December 31 to pay for the SOE offense or 3 months in jail in default of payment.