UNICEF Representative for Belize, Alison Parker, challenges young girls to become ‘agents of change’ on International Day of the Girl

Tropical Storm Pamela in the Pacific expected to become a hurricane tonight, major hurricane on Tuesday 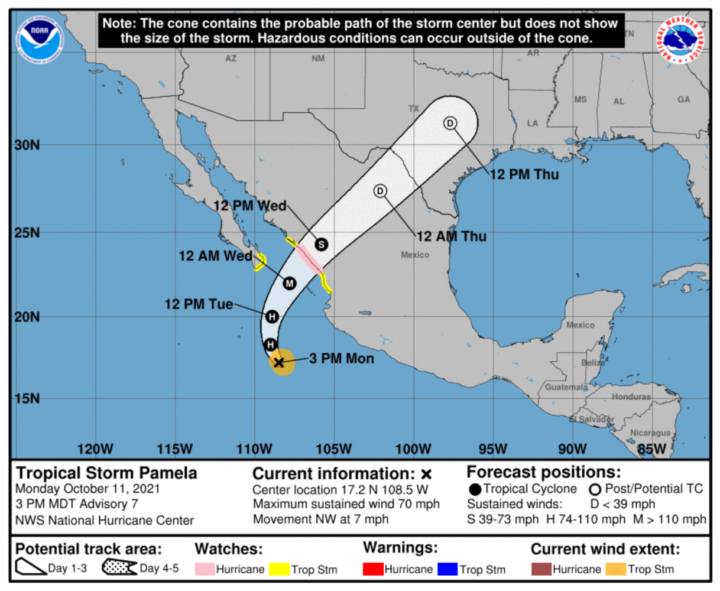 By Rubén Morales Iglesias: The United States National Hurricane Center says Tropical Storm Pamela is moving along Mexico’s Pacific coast and is expected to become a hurricane tonight as it moves towards Mazatlán.

Pamela will pass south of the southern tip of the Baja California peninsula on Tuesday night or early Wednesday and make landfall on the west-central mainland Mexico on Wednesday morning.

The NHC said Pamela is “holding steady for now” but is “still expected to become a hurricane tonight and a major hurricane on Tuesday” as “steady to rapid strengthening is forecast”.

At 3 pm, Pamela was 405 miles south southeast of the southern tip of Baja California and 435 miles south-southwest of Mazatlán.

Pamela had maximum sustained winds of 70 miles per hour and was moving northwest at seven miles per hour. The NHC said that it might turn toward the north late tonight into Tuesday. By tomorrow night it will be moving faster northeastward.

The NHC said that Pamela’s storm surge could “produce significant coastal flooding in areas of onshore winds near where the center of Pamela makes landfall”.