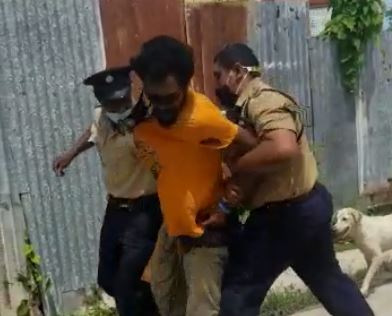 By BBN Staff: Kareem Jason Flowers, 40, was fined a total of $815 in the Belize City Magistrate’s Court yesterday after he plead guilty to three charges against him from an incident in which he was caught with drugs, resisted arrest, and ultimately damaged a name tag belonging to a police officer.

Flowers appeared in Court #5 before Magistrate Khiana Gordon where he was read three charges: ‘possession of a controlled drug’ for an undisclosed amount of crack cocaine, ‘resisting arrest’ and ‘damage to property’.

Flowers plead guilty to all counts, accepting responsibility, so as not to waste the court’s time and asked for leniency, which was granted to him. Amateur footage of the incident showed several police officers struggling to apprehend Flowers as he tried to conceal the drugs from police but during the struggle, he ended up damaging a name tag, valued at $22.09 but which was the property of the Government of Belize.