Dog that policeman shot in Belize City put to sleep 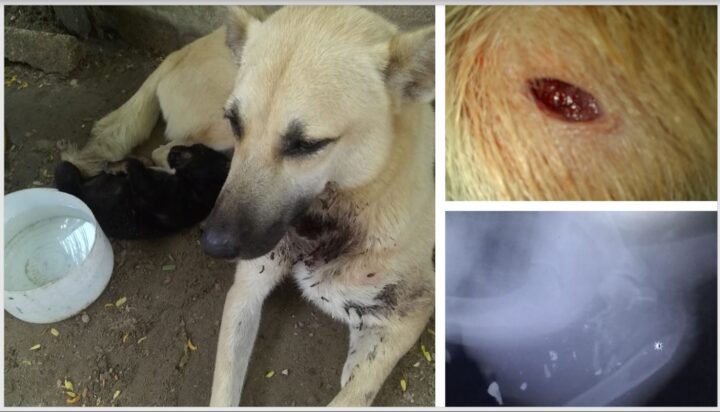 By BBN Staff: The dog that a policeman shot on Sibun Street in Belize City was today put to sleep.

Juanita Uter says four policemen stomped into her yard on Wednesday afternoon at about 3:30 and shot one of her dogs named ‘White Gyal’. She said the officer shot at a second dog named ‘Corona’ but the dog escaped by running under the house. A third dog, ‘Booch’, that was tied, was not harmed since it was held by her daughter, who complained her skin was burned and bleeding because of bullet fragments.

Miss Juanita said her dog had no chance.

“They just stomped open the gate and started shooting. They shot the dog direct and were about to shoot the other dog that we had tied,” said Miss Juanita. “They did not even identify themselves, did not say they were police, ‘please hold the dog, they come conduct a search’, they did none of that. They stomped open the gate and start shooting. The dog didn’t even bark, until the shot rang out that caught the dog, and we heard the dog cry.”

“My son and nephew were in the alleyway, and they ran because they thought they (the police) were gunmen.”

Miss Juanita said the police detained her two sons and her nephew, and have them detained up to today, Friday, but didn’t tell them [the family] why they were making the arrests.

Nathalie Mendez, who runs Shorty’s Animal Rescue, reached out to assist Miss Juanita. She took the dog to Animal Medical Centre where she was informed that one of the dog’s legs had been shattered and that the dog had lost too much blood.

Mendez said euthanasia was recommended because considering the fact that the dog had lost a lot of blood it might be too risky to put her through surgery. Ultimately, White Gyal was put down and buried today.

“It hurts so bad. My dog was like family. It really hurts me that we have to put her to sleep,” said Miss Juanita.
She said she’s going to take action. She’s going to make a police report and press charges against the policeman who shot her dog.

Breaking Belize News wishes to place on record our great disappointment over this incident. As media, we try not to become too involved in the stories we report on, but the seemingly constant level of abuse and callousness by some members of our security forces over the last few months leading to violence and the deaths of innocent men and children is too great to overlook. We hope Miss Uter makes her formal report, and that the police department responds with adequate measures. As dog owners and dog-lovers, it is sad to see a defenseless dog fall victim to senseless human affairs.  We have to ask, who really is the animal?