World Food Day was observed today by the Ministry of Agriculture, Food Security, and Enterprise 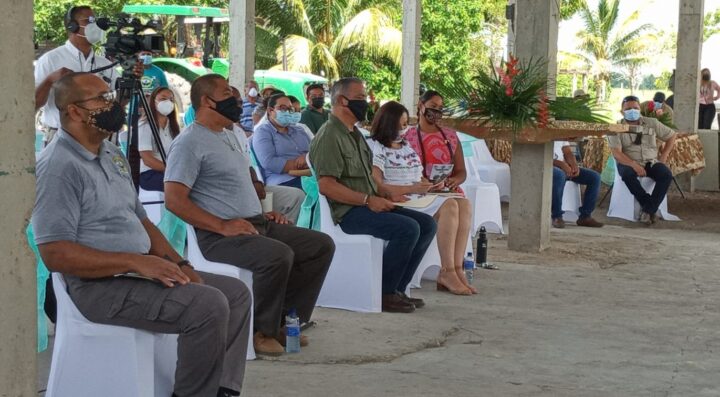 By Rubén Morales Iglesias: The Ministry of Agriculture, Food Security, and Enterprise today Friday, October 15, observed World Food Day with a ceremony at the Orange Walk District Agriculture Station in Yo Creek.

World Food Day is observed under the theme: “Our actions are our future – Better production, better nutrition, a better environment, and better life.”

“A fed nation is a happy nation,” said Chief Agriculture Officer Andrew Harrison setting the stage for the ceremony. Harrison pointed out the world situation saying that the number of undernourished people in the world continues to rise. He said between 720 and 821 million people faced hunger in 2020.

Special Envoy for Families and Children Rosanna Briceño said World Food Day is one of the most celebrated days in the world with 150 countries participating in activities that promote awareness of the food situation in the world.

“A vast majority of impoverished Belizeans are hungry or undernourished, while large numbers are chronically overweight due to a poor diet, she said. “There has never been a more urgent need to transform the way Belize produces and consumes food. Food insecurity presents a multidimensional threat to many Belizeans, and it requires a concerted and multi-sectoral response.”

Mrs. Briceño referenced the MAFSE’s six-year program Resilient Rural Belize backed by $40 million from the International Fund for Agriculture Development and the Green Climate Fund as a key government initiative to alleviate hunger in Belize.

Minister Jose Abelardo Mai, who is on a bilateral relations visit in El Salvador, made a recorded presentation.

“On such an important occasion it is proper to recognize our heroes, farmers, and food suppliers who labor throughout the food system to ensure that food makes its way from farm to table … farmers keep on providing food and we ought to recognize them. It is their actions that are shaping our future by producing nutritious foods and securing our environment for a better life. Thank you, farmers,” said Minister Mai

Right after recognizing farmers as heroes, Minister Mai himself was awarded the Food Hero title by the World Food Day Committee and the Food and Agriculture Organization, a recognition for his arduous work in promoting agriculture

But the opposite is also a reality, he said.

The Prime Minister pointed out that while many go hungry, there are millions of pounds of bananas and thousands of boxes of oranges going to waste. He said we have to find a way to put them to use to be able to ensure that our children who are going hungry have at least one plate of nutritious food for the day.

He said World Food Day serves as a reminder that we should end world hunger.

He also emphasized that they are too many of our young population who are living unhealthy lifestyles and that too many Belizeans are overweight.

That’s why Plan Belize puts such importance on agriculture, he said but added that the idea is not only to put food on the table but to grow nutritious foods that will result in a healthier population.

The Prime Minister, like Minister Mai, also thanked all those Belizean and Belizean organizations that work hard to feed the country.