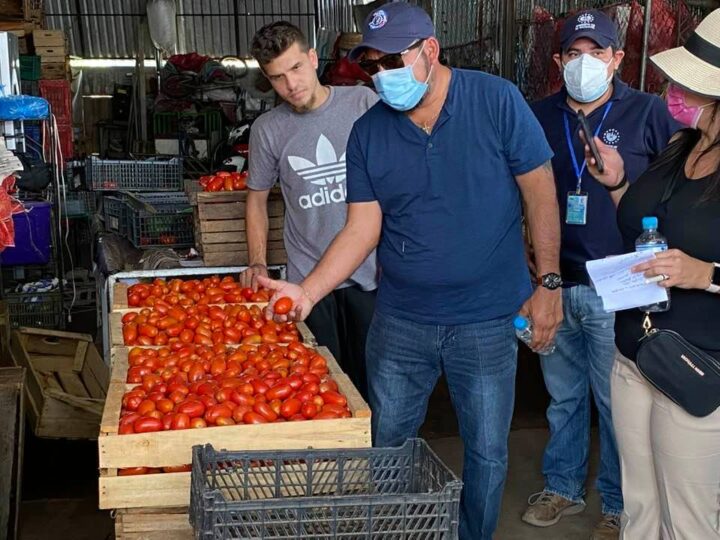 By Rubén Morales Iglesias: Minister of Agriculture, Food Security, and Enterprise Jose Abelardo Mai made a visit to El Salvador last week to explore the feasibility of initiating exports to El Salvador.

Minister Mai said that he met with El Salvador’s Minister of Agriculture David Martinez who was very receptive to the idea which was proposed by El Salvador Ambassador to Belize, Julia Carolina Rovira Aguilar.

“Right of the top I can tell you that we can export watermelon, carrots, ginger, potatoes, and even tomatoes, we can compete with,” said Minister Mai.

El Salvador imports 85 percent of what it consumes and appears a good market for Belize according to Minister Mai who said he made the trip by road to see what it would be like for the exports to reach that country. He recounted that it took eight hours to get across Guatemala to reach El Salvador.

On Saturday, Minister Mai visited the central market in the city of Sonsonate, with Salvadoran Ministry of Agriculture officials, where he compared the fruits and vegetables there with Belize’s and said that he is satisfied that Belize can soon start exports to that country. However, the Minister of Agriculture, Food Security, and Enterprise must first review all the data they gathered during the trip in which he was accompanied by CEO Servulo Baeza and Policy Analyst Milagro Matus.

“Our trip was not in vain as we learned a lot and are returning with the expectation that soon, very soon we will be able to export our Agriculture products into El Salvador similarly as we have been importing certain goods for years from them,” said Minister Mai on social media.

Minister Martinez promised to consult with the Minister of Economy in El Salvador to lift tariffs to facilitate Belizean exports.

“Everything depends on the trade protocol if it calls for a tariff. If the Ministry of Agriculture of El Salvador allows us to export duty-free, or with no tariff, then we’re in a better position. But right now, we’re putting that data in order.”

Minister Mai said that Belize’s watermelon, carrots, and ginger look of much better quality than what he saw in El Salvador.

“If we have a huge supply of tomatoes, we could do a consolidated container. So, I will ask the [Belize] Marketing Board to buy from the farmers. Get one container-load of many things, put it in a cold storage container, a reefer, and transport to El Salvador,” said Minister Mai.

Minister Mai said Martinez, being aware of the number of Salvadorans who have settled in Belize and are in the agricultural industry sees doing business with Belize as reciprocity.

“El Salvador imports mainly from Nicaragua, from Honduras, and from Guatemala; a lot from Nicaragua, which is farther than Belize,” said Minister Mai, hopeful that soon Belize can start exporting to El Salvador, from where we get quite a number of our imports.