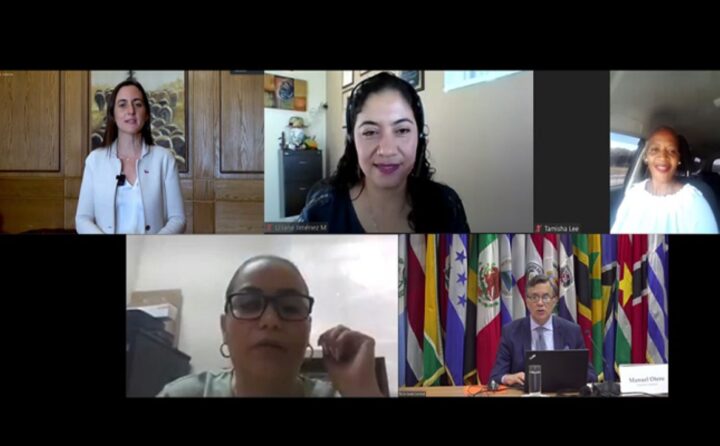 By Rubén Morales Iglesias: Belizean Jolie Pollard participated in the International Day of Rural Women forum organized by the Inter-American Institute for Cooperation on Agriculture (IICA) in which female farmers talked about their fight against inequality, according to an IICA press release.

“When you live in a small rural community with few resources, limitations can serve as an incentive to innovate. Rural women can overcome obstacles and try new things”, said Pollard who creates natural hair care products made from natural algae.

The participants listened to women farmers talk about their personal experiences as women are picking the mantle of leadership in rural areas and said that more people need to be made aware of the inequality that they have to deal with on a daily basis.

Apart from Pollard, the forum also listened to other participants such as Jussara Dantas, founder of an agricultural cooperative in the Northeast region of Brazil; Evelyn Alvarado, a cocoa farmer from Costa Rica; Petrona Pérez, a coffee farmer from Guatemala; and Lucila Quintana from Peru, a promoter of farmers’ associative activities said the IICA statement.

“Women play a key role in rural development, making a significant contribution to the local economy, fostering the eradication of poverty, confronting climate change, guaranteeing education and nutrition for their families, and strengthening the social fabric”, said María Emilia Undurraga, Minister of Agriculture of Chile.

The IICA statement said poverty, marginalization, and food insecurity rates are much higher among rural women compared not only to rural men or but also to urban women.

“Women play a key role in rural development, making a significant contribution to the local economy, fostering the eradication of poverty, confronting climate change, guaranteeing education and nutrition for their families, and strengthening the social fabric”, said Undurraga.

“We commemorate this date to point out that we have a pending debt with rural women and that we must put our words into action”, said Manuel Otero, Director General of IICA, adding that International Day of Rural Women is not a celebration since the 58 million rural women in Latin America and the Caribbean who are responsible for food security and preserving biodiversity, suffer flagrant inequality that is manifest in every part of rural life.

“Only 30% own farmlands, which are smaller in size and quality. The pandemic and resulting mobility restrictions increased the risk for women of being exposed to gender violence, a situation that was demonstrated in several countries in the region. Moreover, rural women earn only half of what urban women earn and a third of what their male counterparts earn”, said IICA’s Director-General.

Otero said IICA will soon call a second meeting of the Forum of Ministers and Vice Ministers of Agriculture of the Americas, which was created in July in the framework of the Food Systems Pre-Summit to promote public policies that empower rural women and promote recognition of their rights.