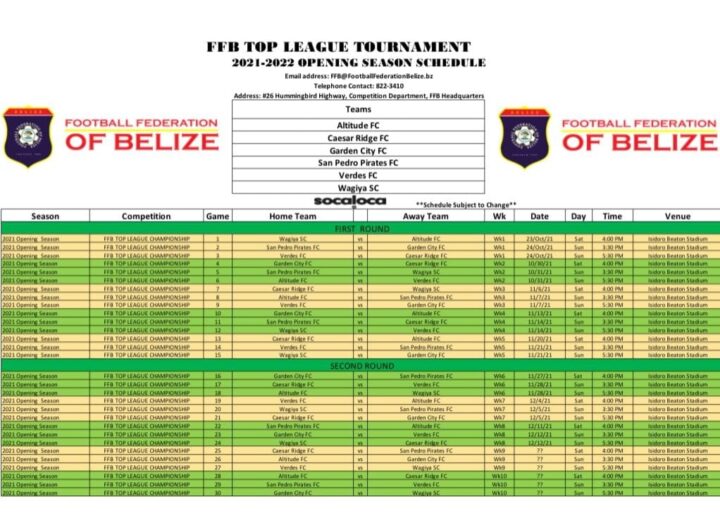 By Aaron Humes: Football is back – sort of.

The Premier League of Belize (PLB) isn’t, at least not until its issues have been sorted out by litigation at the Supreme Court, but a replacement “Top League Tournament” (TLT) featuring six clubs begins on Saturday in Belmopan.

The teams include four (former) Premier League sides – defending champions Verdes FC; Altitude FC of Independence; San Pedro Pirates FC, and Wagiya SC of Dangriga. They are joined by newcomers Caesar Ridge FC of Belize City and Garden City FC of Belmopan, as their name suggests. Games will be played at the Isidoro Beaton Stadium through November as seen in a schedule released by the Federation, with no fans allowed due to COVID-19 restrictions.

In a statement, the Federation explained: “Several clubs had expressed interest and applied to participate in the tournament but only the above six clubs were successful in meeting all the requirements established by the FFB. The FFB Top League as it is presently called was put in place by the FFB because the Premier League of Belize is currently subject to restrictions mandated by the Supreme Court of Belize. The primary objectives of the tournament are as follows: 1) To fulfill the requirement of FIFA for the restart of Football in Belize; 2) To protect the participation berth accorded to the FFB for CONCACAF tournaments.”

Notably, former sub-champions Belmopan Bandits have denounced the new league as a rejection of the former PLB and particularly its executive and a high-handed attempt at control.

The Federation responded indirectly by noting that this will hopefully be the only season of the TLT as it expects that the PLB’s legal issues will be resolved.

The FFB thanks the Ministry of Sports and E-governance and the Ministry of Health for allowing the return of football in Belize. This partnership will now allow Belize to be on par with UNCAF, CONCACAF and FIFA by being active within our region.