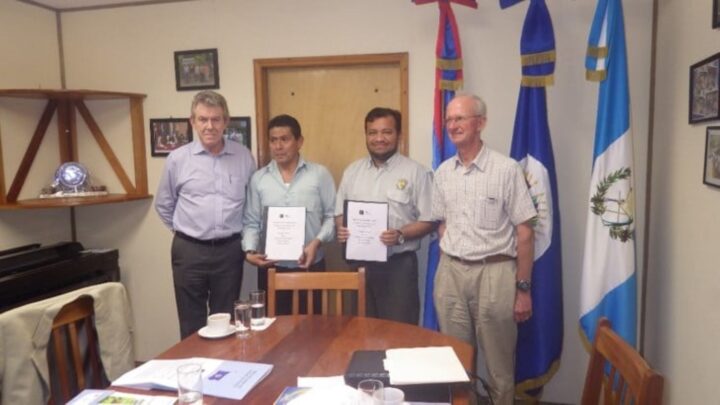 By Rubén Morales Iglesias: Belizean NGO Friends for Conservation and Development (FCD), a Belize non-governmental organization, has been honoured along with its Guatemalan counterpart Asociación Balam with the fourth Annual IBRU Milefsky Award Honours.

The award given by IBRU, the United Kingdom’s Durham University’s Centre for Borders Research, recognizes the work done by the two NGOs in the field of conservation and development across the disputed Belizean-Guatemalan borderlands.

“The Belize-Guatemala region is beset by cross-border tension both at the scale of state politics (Guatemala maintains a claim to more than 50 percent of Belize) and between communities (landless, mostly Indigenous Maya from Guatemala frequently cross into Belize in search of land and survival resources),” said an IBRU press release.

“Despite these tensions, FCD and Asociación Balam have worked in partnership, across the border that divides them, to mitigate deforestation and watershed degradation and to foster peace and community development in the transboundary zone.”

FCD said on social media that their collaboration with Balam dates back to 2011. Since then they have been “chartering mechanisms that promote the protection of the Chiquibul-Maya Mountains (Belize-Guatemala) through sustainable livelihoods, education, and law enforcement.”

David Gibson, coordinator of the Centre for Strategic Studies, Policy Analysis and Research, based in Belize, nominated both NGOs.

“FCD recognized the need for a cross-border conflict prevention initiative and successfully engaged with its Guatemalan counterpart, Asociación Balam, to take action,” wrote Gibson in his nomination said the IDRU statement.

“Their cross-border NGO and community-level initiatives have resulted in the signing and renewal of formal agreements for the protection of the Mopan River watershed between twenty Belizean and Guatemalan communities. Climate science-based measures to prevent further deforestation and to contain forest degradation activities have been adopted, emphasizing environmental education, promoting sustainable alternate livelihoods, and stimulating a range of cross-border community collaborations.”

In granting the award, IBRU Director Philip Steinberg said that borders like the Belize-Guatemala border, which are associated with tension and conflict, can also have communities working together to improve livelihoods and manage environments.

“IBRU is proud to honour the work that FCD and Asociación Balam are taking to build a foundation for peace and understanding across this transboundary region,’ said Steinberg.

The Milefsky Award is made in honour of Raymond Milefsky, a US Department of State borders expert who tutored at IBRU training workshops.

The award includes a cash prize of £745, which will be shared between FCD and Asociación Balam.