‘Blue Bonds’ approved – who gets the credit? 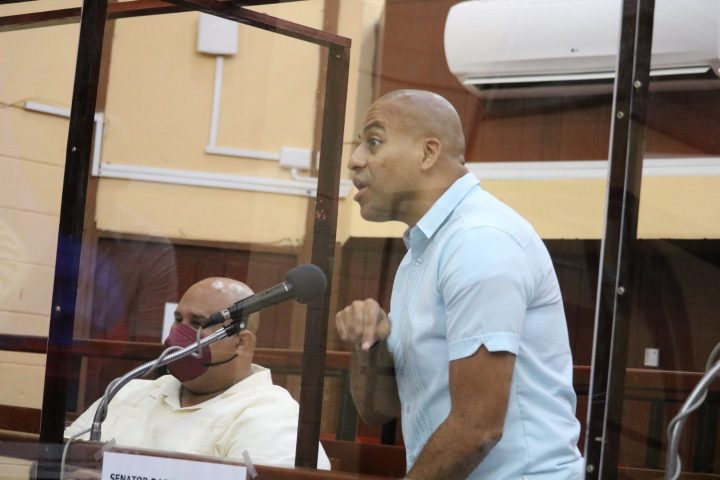 By Aaron Humes: The Reparatory Justice for the Trans-Atlantic Slave Trade and Slavery in British Honduras Motion, 2021 saw little objection today in the Senate after widespread bipartisan support in the House of Representatives 48 hours earlier.

Opposition Senator Darrell Bradley pointed out that while in Belize’s case Maya people were also impacted by slavery, having been chased from their cities and settlements by the advancing British, the motion is limited to impacts of the trade on slaves and their descendants of African descent. He also asked for clarification on the channels by which Belize would address the issue – whether an international tribunal or a court in the United Kingdom as suggested by the motion – and a public education campaign.

“Has the Government given thought to significantly more public education, public dialogue, and discussion on this issue, particularly because it is something that is so impactful on a significant portion of the population?” asked Bradley, adding that there are issues to be hashed out publicly on matters of identity and other issues tied to the process.

Senator for the Churches Bishop Moses Benguche noted that the issue has already caused some heated argument and that we must be reminded that as we embark on this journey, not only the Black populations but others – East Indian indentured servants and Chinese – were also impacted. The church, he said, was at the forefront of addressing the issue. He also questioned whether the region would push for other slave-trading European nations – France, Spain, and the Netherlands – to be similarly dealt with.

Senator Eamon Courtenay lamented that the British Government, as recently as 2015, has barely acknowledged the grave sin committed against Africans, with then-Prime Minister David Cameron encouraging during a visit to Jamaica in 2015 to “move on as friends and build together for the future.”

Senator Courtenay said the draft claim is in ‘its final stages and would be presented in the Judicial Committee of the Privy Council – Belize’s final court of appellate and original jurisdiction up to 2010. As to the exact figures and nature of reparations, advice was being taken on that, he said.