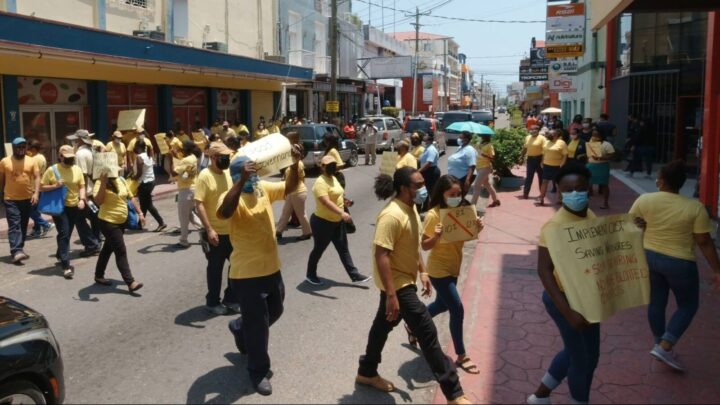 By Aaron Humes: A thirty-member delegation from Belize is participating in the Twenty-sixth Climate Change Conference of Parties (COP26) in Glasgow, Scotland, United Kingdom starting today, Sunday, October 31 to November 12.

Prime Minister John Briceño, leading the delegation, has deemed the meeting “probably one of the most important meetings that we’ve had, probably in history concerning the challenges we face with climate change.” He went on to cite the participation of his office, the Ministries of Sustainable Development (which directly deals with climate change as a portfolio), the Blue Economy, Attorney General, and Finance as well as Foreign Affairs.

So why the large delegation? The P.M. said climate change problems affect each of these Ministries and decisions will be made on protected areas, the oceans, carbon credit and contracts for loans and other monies that will help Belize mitigate climate change adaptation and risk.

According to P.M. Briceño, funds will come from the Caribbean Community Climate Change Center headquartered in Belize and from the conference itself in the case of heads of government like himself.

But the Public Service Union (PSU) issued a statement on Friday says that’s not enough. It throws the caution words of austerity and sacrifice and management of financial resources during this trying time back in Belmopan’s face and argues for at least some of the support staff to attend virtually to save costs.

Failing that, the Union says it “expects FULL transparency from the Government of Belize (GOB) with the publication of the total cost incurred by the GOB inclusive of airfare, hotel accommodations and cost per diem. This would offer ALL Belizeans a better picture of what taxpayer dollars are being allocated to,” as well as the total funding by participating organizations: the United Nations Development Program, the REDD+ Project, the Biodiversity Finance Initiative, the Government of the Republic of China (Taiwan), the Protected Areas Conservation Trust, and the EnGenDer Project.

And of course, the decision to cut salaries by ten percent is also brought up with the reminder that it expects that it would be for the betterment of the country and that the promise of austerity, accountability and transparency along with the economic development of the nation be kept.

Meanwhile, the P.M. cited new initiatives such as the 30/30 initiative – 30 percent of our waters as “special space” for growth, located mainly in the exclusive economic zone (EEZ) and the Blue Bonds arrangement replacing the Superbond.