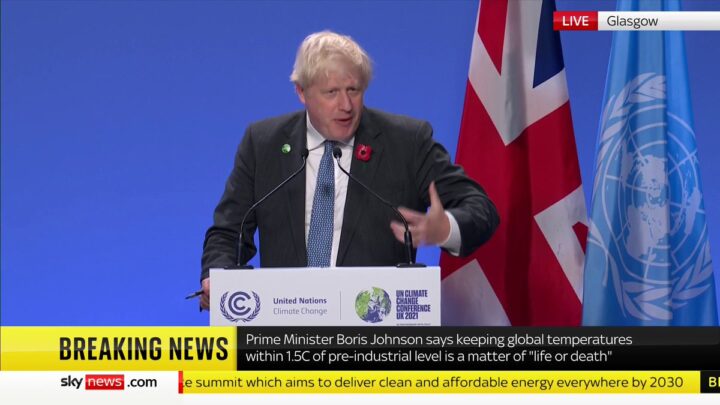 By Rubén Morales Iglesias: Prime Minister John Briceño spoke about the climate injustices of the developed world at the 26th United Nations Climate Change Conference of the Parties (COP26) in Glasgow, Scotland, prompting UK Prime Minister Boris Johnson to agree with him.

Briceño said the developed industrialized countries owe it to the smaller nations, particularly the Caribbean countries which are in the frontline of the fight against climate change, to put their money upfront to face this fight.

Sky News political correspondent Abushka Asthana asked Johnson at a press conference if he understood the anger of the Belize Prime Minister who said the developed countries are not doing enough and that the West got rich on lavish lifestyles and was now telling developing countries they couldn’t do the same.

“I think you’re absolutely right, Anushka, to highlight the feelings of people in Belize and in vulnerable states around the world that are in the front line in the fight against climate change,” Johnson responded.

Johnson said that it was very humbling to listen to colleagues like Barbados Prime Minister Mia Motley who also said the same thing at the UN General Assembly. Incidentally, Mottley and Briceño jointly called for unswerving global solidarity.

Johnson acknowledged that the developed countries owe a special duty to these countries.

“Why should they suffer this immediate impact, this loss, and damage because of emissions that we in our country began to produce 250 years ago. Now we can say, well, for the vast majority of that period we had no idea that the CO 2 emissions we were producing were doing that damage. It’s only really been in the last few decades that we started to understand the whole greenhouse effect, but we owe a special duty to those countries.”

“That’s why the Prime Minister of Belize is right to point to the need for cash. That’s why the 100 billion is so important and it’s good that Japan has stepped up, but other countries are going to have to do more.”

Johnson went on to say that Briceño was right to demand that more be invested in the fight against climate change.

“When it comes to helping countries to transition, then a huge effort is needed,” noting that they have the tools and in theory, they have the finance to do it, but they need the cash to be evident.

Johnson said that so far at COP26, progress has been made on the discussion on trees, but more needs to be done on cars that have not been discussed yet, concluding that much more still needs to be done.

“So, I’m not going to disagree with what the Prime Minister of Belize has said, or indeed even anybody who says that the world, in the remaining days that we have in this COP, the world has a lot, lot more to do.”