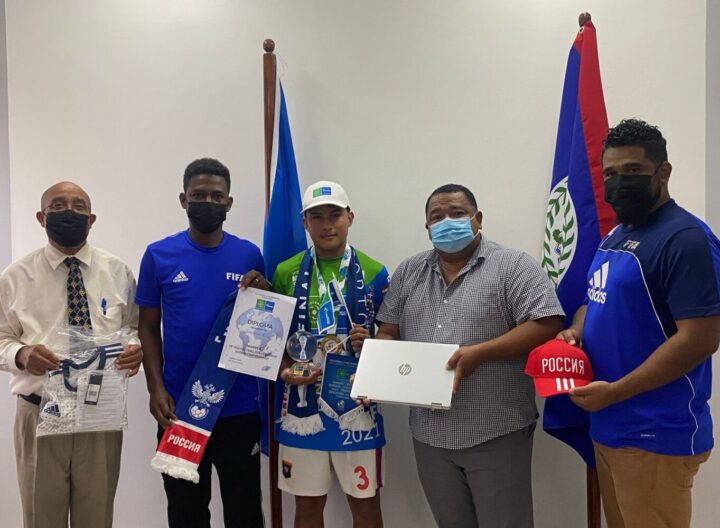 By Rubén Morales Iglesias: Earlier this year on May 28, Belizean Allison Jazir Torres and his international team Argali won the 2021 Football for Friendship eWorld Championship and today he received his awards.

“I received a great surprise today,” said Torres who was handed the awards by FFB President Sergio Chuc and Technical Director Philip Marin at the FFB Headquarters. “I received a lot of tokens, I received a laptop and several awards.”

Football for Friendship (F4F), according to the organization’s website, “is an annual international children’s social program implemented by Gazprom since 2013. The program includes a number of sports and educational events held in different countries around the globe with the aim of promoting a healthy and active lifestyle, as well as fostering an attitude of respect toward other cultures among its Young Participants.”

One of its programs is the F4F eWorld Championship which was won by Allison Jazir Torres of Orange Walk along with his teammates from different countries, namely Tomás Bryant, Alejandro Quintero and Nicolás Beirute of Costa Rica, Dyrick Wouters of Aruba, José Ignacio Amado Iriguez of Guatemala, and Emilio Jafet Hernández Mengual of Mexico.

“I got the golden opportunity to be part of this Football For Friendhip eWorld Chamlionship,” said Torres today. “I played the role of a coach where I had to coach other players like me from other countries like Costa Rica and Guatemala. The favorite part was that I got new friends and I got to talk with the famous Roberto Carlos of Real Madrid.”

Apart from his personal prizes, Torres also won 25,000 Euros for the Football Federation of Belize (FFB).

Organizers Gazprom had said at the time that “The winners of the F4F eWorld Championship will receive gaming laptops, while the academies they represent will receive grants to improve the development of children’s football and to promote the Nine Values of Football for Friendship.”

Two other Belizean youngsters participate in the eWorld championship. Athiana Ovando from Corozal represented as a journalist and Bart Ellis Jr from Stann Creek represented the FFB as a player. They competed in the F4F eWorld Championship with different teams.