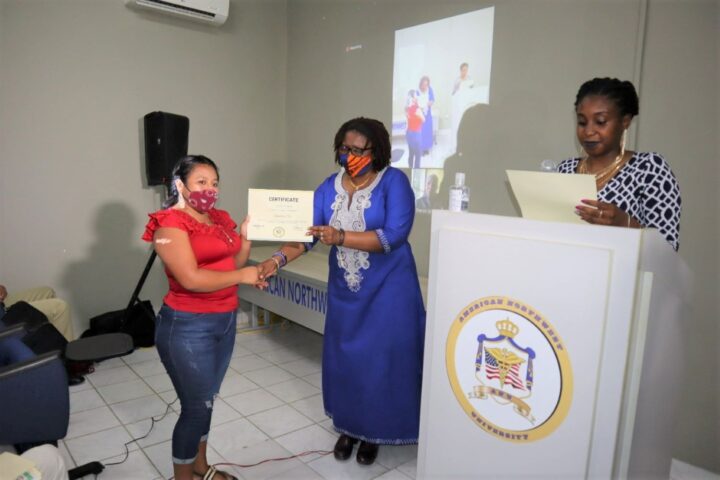 According to Belmopan Mayor, she lobbied ANU owner/philanthropist Dr. Mohammad Khamis who agreed to grant scholarships valued at over BZ $8 million to the 31 deserving Belizean students.

“I’ve secured scholarships for approximately 30 students, about 10 of them is a 100% paid-for, and all other 90% paid, so, it’s a huge undertaking that the city of Belmopan is benefiting from,” said Mayor Palacio. “We have students from all over the country, the majority of them are from here Belmopan, though.”

ANU School of Medicine is located at #2 Dr. Creek St in Belmopan. ANU has campuses in Bosnia and Herzegovina, and Chicago said, Mayor Palacio.

“It is right here in Belmopan. It is a medical school/hospital. The owner of the school is Dr. Mohammad Khamis, and he has invested quite a sum of money and as the Mayor, I established a relationship with him and got him to contribute significantly,” said Mayor Palacio.

“American Northwest University was established and located in the heart of Belmopan, the Capital of Belize, Central America with an office located in Chicago to conduct all clinical rotations,” says the ANU website. “The idea was to establish a bridge between Central America and Chicago to offer our students and graduates hands-on experience to gain wealthy knowledge from the American educational and health system.”

“The scholarships include tuition, books, fees, everything,” said Palacio.

American Northwest University – School of Medicine set up shop in Belmopan in 2018 and had already completed two years of schooling but suspended its sessions to undergo changes and is now ready to restart said, Palacio. The university is to restart is sessions next month.

“I want to say that this opportunity that our students received in this form, that we are very grateful. We look at it as a blessing because, you know, City Council, we inherited nothing. We don’t have any kind of cash flow or anything like that, so these are the type of opportunities that we need more and more. And the more we educate our people, the stronger we’re going to be. Together we’re stronger,” said Mayor Palacio.