Clint Geban, 22, remanded to prison for pulling a gun on another man

Reese Fitzgibbon, 24, allegedly shot by police, could not make an official complaint because he was not vaccinated 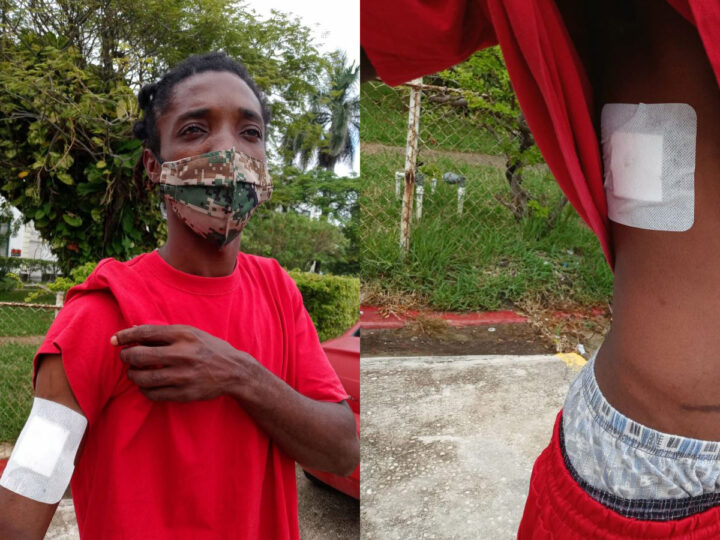 By BBN Staff: A man seeking to make a formal complaint of police brutality after officers allegedly shot him, could not access the police station to lodge the complaint because he is not vaccinated.

Under the current COVID-19 regulations one needs either a vaccination card or a negative COVID test to access the Racoon Street Police Station and make the formal complaint at the Professional Standards Branch, but 24-year-old Reese Fitzgibbon had neither of those.

Fitzgibbon says he was targeted by police in connection with a shooting incident on Amara Avenue on Saturday, November 13. He said that, following the shooting, police officers barged into his home, pointed guns at his two teenage stepdaughters, and brutalized him while they were detaining him. He also said that they did not even tell him why they were detaining him.

“Now they opened the truck for me and as I walked into the truck this *ss wa push a shotgun on my side and shot me with a rubber bullet, tear up my side and my hand,” Fitzgibbon said.

He said that police refused to give him the name of the officer that shot him and refused to give him medical treatment until hours after. The police department has yet to respond to the allegations. Police also allegedly took his medico-legal form, and then released him after 48 hours without charging him with anything.

He said that he will take legal action and left to get his vaccine so that he can file the formal complaint. Police have not officially commented on the issue.