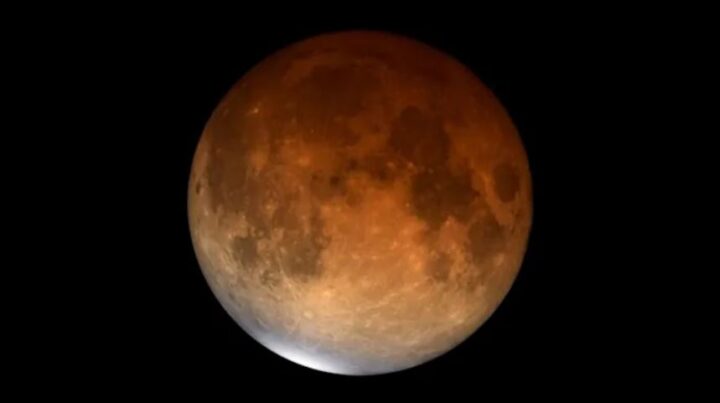 By Aaron Humes: A literal once-in-a-lifetime opportunity manifested in the night skies over Belize and other countries as Garifuna Settlement Day arrived.

The full moon passed through Earth’s shadow beginning just after 2 a.m. local time, producing a partial or annular lunar eclipse visible over most of North America and the Caribbean.

The Moon’s path plunged it nearly all the way into the deepest, darkest part of Earth’s shadow — the umbra. At the moment of greatest eclipse, about 3 hours after the event begins, only a tiny sliver of the Moon’s south polar region remained in the faint penumbra, taking it very close to a total lunar eclipse.

The entire eclipse lasts for 6 hours and 1 minute, from beginning to end. For the first hour and 15 minutes or so, it may be difficult to notice the effects as the Moon enters the faint penumbra. After that, though, the partial phase of the eclipse begins. This is the good part, when the dark umbra begins to creep across the face of the Moon.

During a total lunar eclipse, when only a tiny portion of the Moon is peaking out of the umbra, close observers often notice bands of colour spread out across the Moon’s face. This becomes even more noticeable through a telescope, a pair of binoculars, or through a camera using a telephoto lens. This array of colours is known as the Japanese Lantern Effect.

At 3 hours, 28 minutes and 24 seconds long, Thursday night’s partial lunar eclipse was the longest seen this century and has occurred once in five centuries and not again for another six.