Nicaragua says it is withdrawing from the Organization of American States 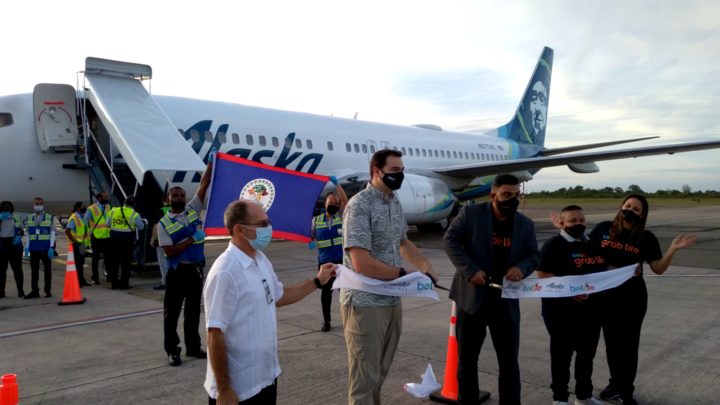 By Aaron Humes: Cake, champagne and Garifuna drums heralded the arrival of a new airlift partner in Belize’s tourism industry, still recovering from the body blow of COVID-19 and its impact on travel.

Alaska Airlines has inaugurated year-round service from Los Angeles, California, as well as seasonal service between November and May from Seattle, Washington.

“This is a signal for us here in Belize, that the partnership with Alaska Airlines is going to be a good one,” Minister of Tourism and Diaspora Affairs Anthony Mahler said in his address, adding that from childhood he had longed to travel on the plane with “the big smile of the Eskimo.”

He said that the arrival of Alaska and JetBlue and the return of old favorites will help restore revenue. Alaska alone travels to 115 destinations in four countries, with more than 1,200 flights per day, and Belize now has a share in that and an obligation to build our level of hospitality and service to ensure more come to Belize via Alaska.

Kevin Lemne, representing Alaska Airlines, noted that the genesis of today came from an employee who visited 20 years ago and wanted to know when he got back why the airline was not serving Belize. But it took until three years ago for a formal proposal to be made.

The partnership gets tourists to Belize’s unique experience and gets Belizeans up to Los Angeles and Seattle at a relatively cheap cost – approximately US$300 – $350 round trip to LAX and slightly higher to SeaTac International Airport.

According to the Belize Tourism Board, inaugural ceremonies were held in Seattle, Santa Monica, California, and at the PGIA.

In association with Converge Media, a leading producer of culturally relevant content in Seattle and across the Pacific Northwest of the U.S., a group of 14 influencers arrived on the inaugural flight for an 8-night stay to enjoy and feature the Garifuna food and culture and activities in Dangriga, Hopkins, and Placencia. They will also visit the Belikin brewery and a Liquors Distillery in Belize City. In addition, media representatives from Teen Vogue, POPSUGAR, Huffington Post, InStyle, the Los Angeles Times, and Washington Post also arrived in the country to an itinerary packed with Belize adventures and culture.

Tickets can be purchased at alaskaair.com for flights twice per week for Seattle and four times per week for Los Angeles.