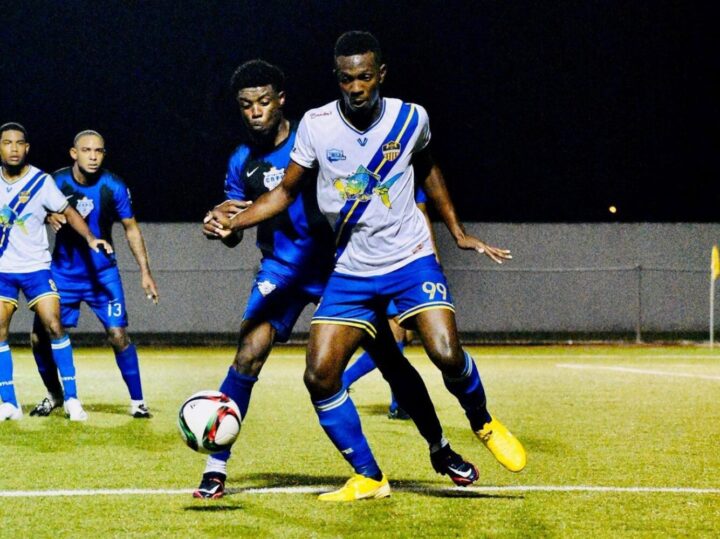 By Rubén Morales Iglesias: Altitude closed off the first round of the FFB Top League trouncing Caesar Ridge 6-0 at the Isidoro Beaton Stadium in Belmopan where all games are played without fans.

Rene Leslie scored the fastest goal of the tournament in the 11th second of the match. Thereafter it was a quiet match until Altitude exploded in the 52nd minute when Miguel Garcia made it 2-0. Then, it poured – Jardehl Muschamp (69′), Luis ‘Baca’ Torres (73’), Jonard Castillo (79’), and Gabriel Ramos Jr. (82’) completed the half dozen.

This is the second worst defeat for Caesar Ridge who were routed by Verdes 13-1 on opening week.

As to Verdes, the Green Machine rolled over the San Pedro Pirates 3-0 on Saturday and finishing the first round of the FFB Top League championship in the top spot with 15 points, five more than their closest rivals, Altitude, who have ten.

Jordy Polanco opened the score with a header off a right-to-left pass by Krisean Lopez in the 36th minute. Paraguayan striker Junior Vargas then came up with a brace for the final 3-0 win. Vargas’ first goal was identical to Polanco’s goal. Alence Ayala crossed the ball from right to left and Vargas, position by the far post, put it away for the 2-0 lead in the 42nd minute.

Then, in the 67th, Vargas nailed his second for the final 3-0 Verdes victory.

On Sunday, Morvin Budna hit one in each half to lead Garden City to a 2-0 win over Wagiya in the first game of the day. The first goal was a pass from Carlos ‘Quique’ Gonzalez in the 23rd minute and the second from Andres Makin in the 73rd.

The Pirates are in third place with seven points, followed by Wagiya in fourth with five. Garden City have four points in fifth place. Caesar Ridge are in sixth with one solitary point.