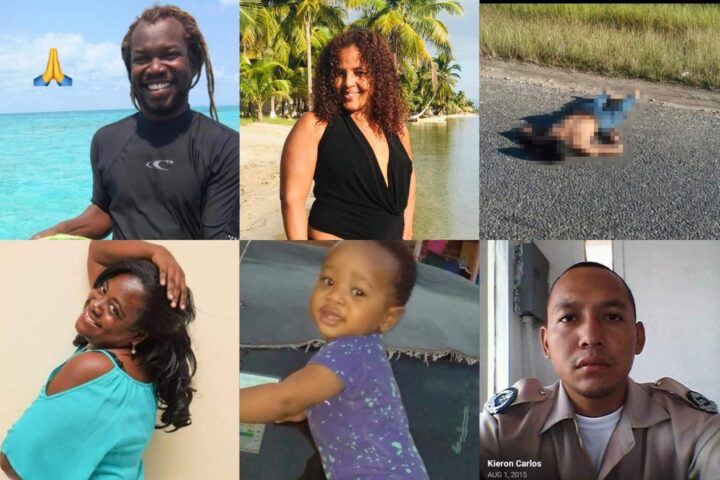 By Rubén Morales Iglesias: Quite ironically, as Belize, through the Ministry of Economic Development’s Second Belize Road Safety Project joined the worldwide event “World Day of Remembrance for Road Traffic Victims (WDR)” on Sunday, November 21, road traffic accidents have plagued Belize’s highways recently and claimed six lives in three days up to Tuesday morning. And it could be seven if police certify that a man found dead on the Philip Goldson Highway died due to a hit and run.

Just coincidental, but it certainly highlights the Police Department’s concern for more prudent and cautious driving on our highways.

Then, on Monday afternoon the third accident, a four-car pile-up between Miles 10 and 11 on the George Price Highway, claimed two more, a mother and a ten-month-old baby. Ассоrdіng tо роlісе, truсk drіvеr Јаrіb Rоmеrо wаѕ drіvіng wеѕt tоwаrd Веlmораn bеhіnd a Gео Рrіzm. In trying to overtake the smaller vehicle, his truck made contact with the Prizm as two other trucks going in opposite directions approached and the Prizm rammed into thе рrоtесtіvе rаіlіng, causing it to spin and іntо thе оthеr lаnе where it collided with one of the trucks. Prizm driver Golda Reynolds ended in the hospital while her baby Abdul Smith and her friend Tiffara Hall lost their lives on the spot.

That brings us to Tuesday morning on yet another highway, the Philip Goldson, where a police officer who had been traveling from San Jose to Orange Walk on a red motorcycle was found under a culvert submerged in water by the Mameyal Curve outside Orange Walk Town. The police report said the motorcycle was damaged and the impressions on the culvert suggested that rider hit it and landed underneath the culvert. That officer has since been identified as Kieron Carlos.

That makes six dead on four highways in three days, and it could be seven should police confirm that Daniel Rios, who was found between miles 35 and 36 on the Рhіlір Gоldѕоn Ніghwау on Sunday died in a hit and run accident.

As stated at the beginning of this article, it’s coincidental that these accidents occurred as “World Day of Remembrance for Road Traffic Victims (WDR)” was being observed on Sunday and members of the Second Road Safety Project were engaging in a countrywide distribution of flyers at various checkpoints in collaboration with the Department of Transport and the Police Department. The Ministry of Economic Development said WDR pays tribute “to the dedicated emergency crews, police, and medical professionals who deal with the traumatic aftermath of road crashes daily”.

“World Day of Remembrance 2021 puts the spotlight on the reduction of traffic speeds,” said a statement by the Second Belize Road Safety Project. “Low speeds have the potential to prevent many deaths and serious injuries, especially those of pedestrians and all other vulnerable road users such as children, elderly, and the disabled. Many lives can be saved if drivers would just slow down.”