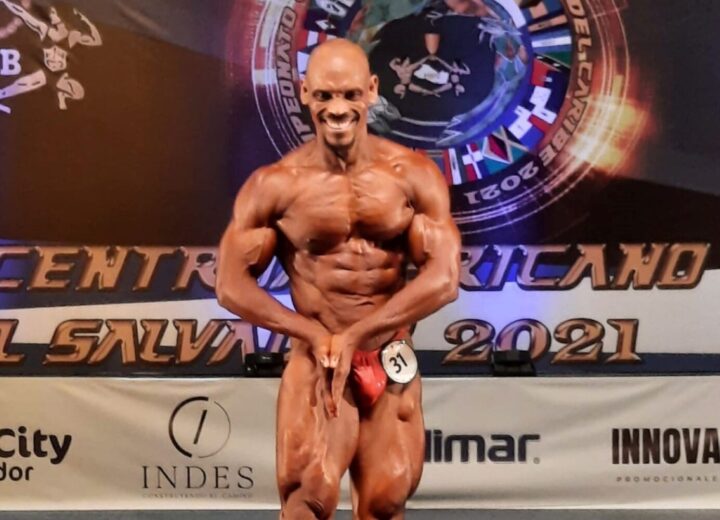 By Rubén Morales Iglesias: “I feel elated and humbled at the same time to be recognized by my merits in the sport I love as an Elite Pro Master Bodybuilder,” said Belizean bodybuilding champion Clayton Greenidge who recently received his Elite Pro Card from the International Federation of Bodybuilding and Fitness (IFBB) recognizing him as a professional athlete.

“My future aspiration is to compete in the IFBB World Master Elite Pro,” he told Breaking Belize News.

“I am grateful for all the support from my individual and corporate sponsors who made it possible for me to represent Belize internationally and to BBBF for their invaluable support.”

Greenidge, who is originally from Grenada, said his goal had always been to become a professional bodybuilder. On his way to becoming a pro, he won several regional titles in his amateur career representing Belize. These include two gold medals in the Central American Olympic Games in Nicaragua in 2017 and two gold in two bodybuilding categories (up to 80 kg & Masters Bodybuilding) in the recent Central America & Caribbean IFBB Championship in El Salvador in August 2021.

“As a young man who was introduced to the sport of bodybuilding my dream was to achieve professional status from the IFBB who represent the maximum authority in our sport.”

““So, it is a big deal for our local Federation since he has achieved the highest recognition in our sport,” said the Belize Bodybuilding and Fitness Federation (BBBF) president Mirna Paul Greenidge, who is also Clayton’s wife.

“This means he is no longer an amateur athlete, and he has become a professional. This earns him the rights to compete in Elite Pro Championships sanctioned by the IFBB around the world.”

“The highlight of this is that he is the first in Belize to qualify for a professional card from IFBB, the federation with the maximum authority in the sport of bodybuilding with a membership of 196 countries,” said the BBBF president.