‘Special Prosecutor’ to be hired for drug plane cases; Commissioner of Police calls out defense attorneys including ‘Dickie’ Bradley 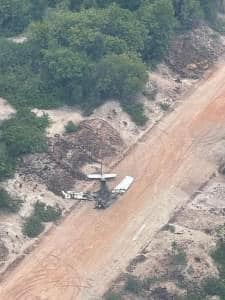 By Aaron Humes: Four individuals, including a police corporal, are facing charges in relation to a small single-engine plane that crash-landed into the forests of the Mountain Pine Ridge on Saturday.

For unknown reasons, according to Commissioner of Police Chester Williams, “…the [three] tracks disappeared off the radar, and suddenly reappeared when they were already within our airspace, and therefore the teams could not have been deployed as quickly as they could have been.” The tracks were observed coming from South America.

When police got to the remote area, they stopped one of two vehicles they encountered, the other initially got away. In the first vehicle were three persons: a Corporal of Police attached to the security of the Director of Public Prosecutions and two men from the San Ignacio area. The third person drove the second vehicle and is a Mennonite who owns a farm not far from the crash site.

Police recovered the Mennonite’s vehicle and $12,000 cash unaccounted for from his house. All will face charges for facilitating the improper landing of aircraft.

Assistant Commissioner for Operations Alford Grinage is leading teams in the area to search for the cargo, which police believe the Mennonite disposed of but may still be in the area.

The Commissioner dismissed the claim that the men were out “hunting:” “They were hunting cocaine,” he said bluntly. He noted that the four men have “lawyered up” and refused to cooperate with the police.

The accused Corporal is a resident of Esperanza village in the Cayo district and was known to have been a member of the former Gang Suppression Unit (GSU) when it was commanded by ACP Marco Vidal, and also to have worked with the Special Assignment Team (SAT) in Belize City which Vidal was also in charge of. However, the Corporal was not a member of the recently disbanded Commander Operations Special Team (COST).

The men are formally expected to be charged by tomorrow, Tuesday.