BTB thanks Simone Biles for vacationing in Belize for US Thanksgiving 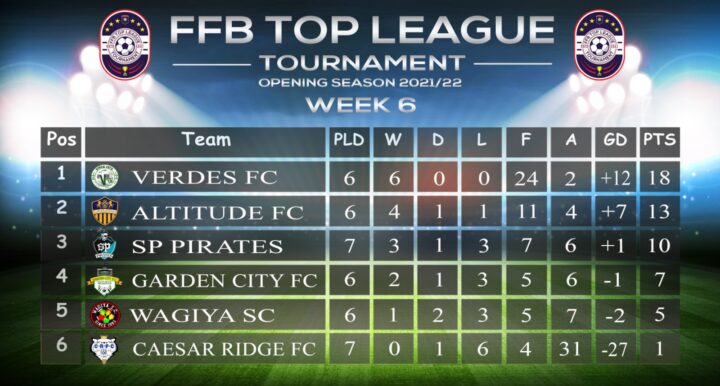 By Rubén Morales Iglesias: Verdes won their sixth consecutive match in the FFB Top League totaling a perfect 18 points, five more than their closest competitors Altitude, who have 13.

Verdes downed Caesar Ridge 3-0 at the Isidoro Beaton Stadium in Belmopan. While that’s a great score, it’s far from the first round’s 13-1 blowout of the Belize City squad.

In fact, it was a difficult game for the leaders who were held to scoreless draw up to the 75th minute when Verdes finally scored through the efforts of Colombian Camilo Andrés Márquez via a penalty kick. Mexican Edwin Villeda extended the lead to 2-0 in the 85th and Krisean Lopez put it away three minutes into injury time from the penalty spot.

Second place Altitude beat Wagiya 2-1 on a brace by Ashley Torres who scored in the 7th and 71st minutes. In between, Carlton Thomas got Wagiya’s lone tally in the 33rd.

On Saturday, Belmopan’s Garden City edge San Pedro Pirates 1-0 on a strike by Jarret Davis in the 19th minute.

Despite the loss, the Pirates remain in third place with ten points but Garden City now with seven are fourth. City skipped over Wagiya who are now in sixth with five points. Caesar Ridge are in last place with only one point.