Christmas Cheer after all? 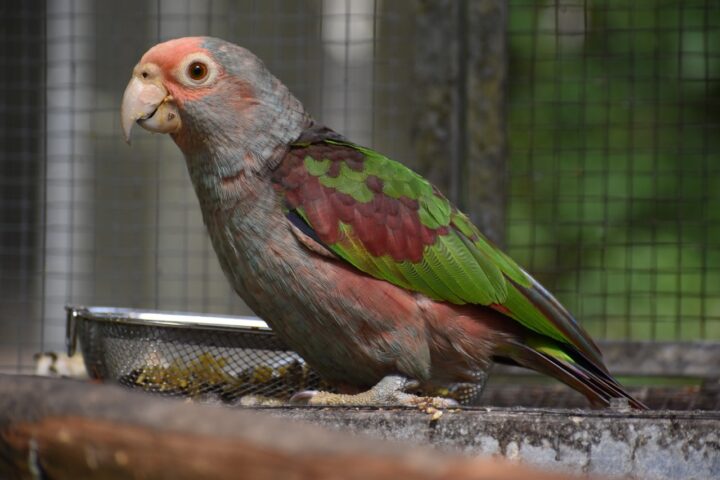 By Rubén Morales Iglesias: Peachy-Rose, a mistreated, discolored, and malnourished red-lored Amazon parrot, is now safe. And that’s because of the Belize Bird Rescue in Roaring Creek, Cayo District.

When Nikki Buxton, who heads Belize Bird Rescue heard of a red-lored Amazon parrot that was being mistreated and was discolored, she immediately tried to find out where it was. It took a while but finally, with the help of the Forestry Department, they were able to identify the location in Roseville near Red Bank, in southern Belize.

“The Forestry Department wouldn’t leave without her because she wasn’t looking good,” Buxton told Breaking Belize News. “Apparently, they just kept her at the farm, and they didn’t feed her. They would just let her go up in a tree during the day and take what she could from the tree. Which may explain why she looks like she does.”

“We had seen images of this bird on social media for a year or so, but we could never figure out where she was located, until this month when we were given a village location along with an image” Buxton wrote on the Belize Bird Rescue page on Facebook on Tuesday, November 30. “This demonstrates how small Belize really is, as with just the name of a village, the Forestry Department located her and brought her in for rehabilitation.”

Buxton explained that “feather discoloration is the result of a chronic diet deficiency, but now she’s on a better regime we hope she will start to regrow with the true coloration of a red-lored Amazon parrot.”

And now that she’s in a safe and caring location, Peachy-Rose seems to be trying to make up for all the time she didn’t have anything to eat.

“She eats a lot. She’s eating quite a bit too much, actually,” said Buxton. “She is another bird that has literally not stopped eating since she arrived, so we may have to put her on a calorie-controlled diet before too long! Poor thing, can’t win.”

Buxton says that she’s not sure if Peachy-Rose will ever get back its natural colors but for now she’s being taken care of at Belize Bird Rescue.

And she couldn’t be in a better place.

Nikki Buxton and Jerry Larder came from England 18 years ago to settle in Belize and that’s when Belize Bird Rescue came to be. 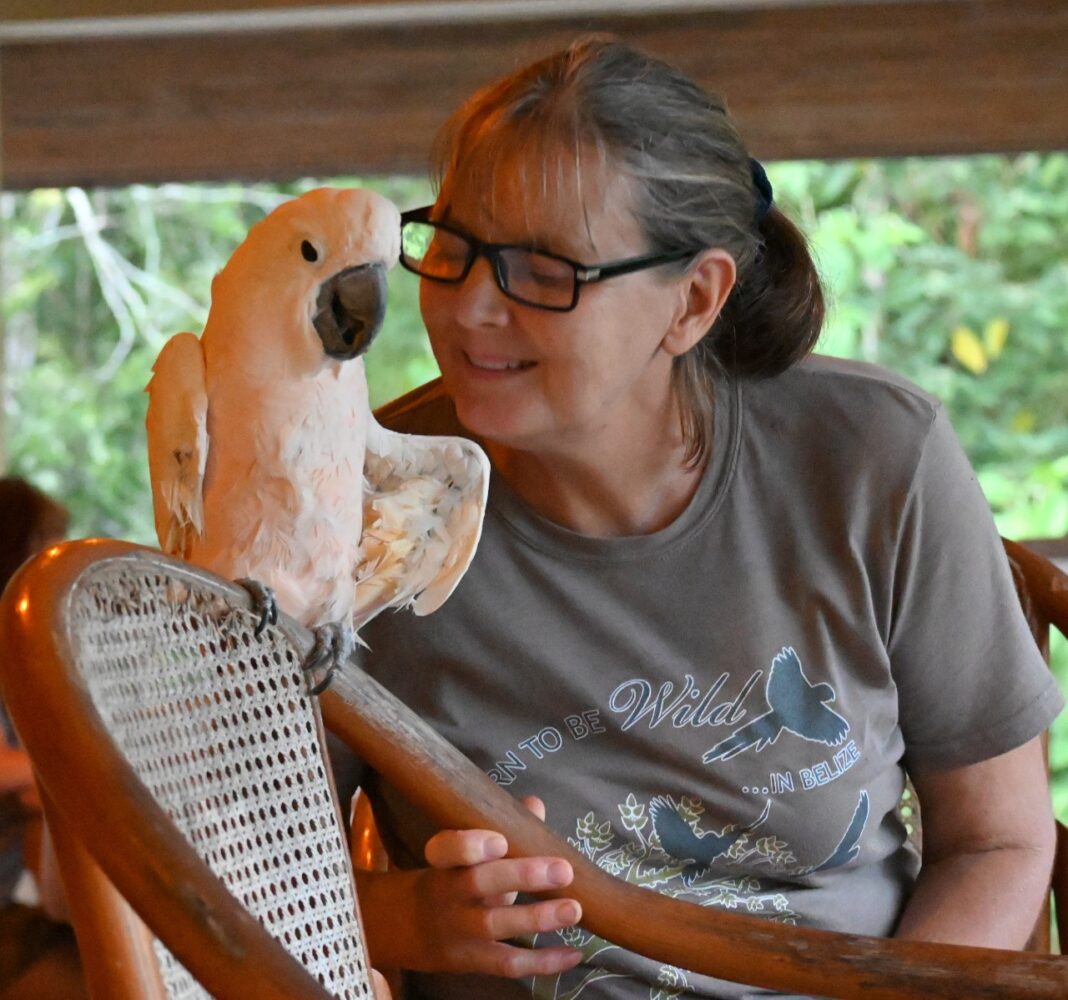 “We didn’t come to Belize to do that; it just happened,” said Buxton. “You know how Belize tucks you in. When we first got here 18 years ago, we set it up because we realized there was a need to have somewhere for these birds to go if they were confiscated.”

She said that there was no way Forestry Department could enforce the law if Belize didn’t have a rescue place. And so, it started.

And it has turned out an amazing story. What started with one bird turned into a full-fledged operation.

“We primarily work with parrots,” she said. “We rehabilitate them and release them, and they stay in the sanctuary if they can’t. We’ve rescued over 2,000. We rescue all types of birds, raptors, waterbirds, songbirds, pelicans, toucans. You name it, we take it.”

At this moment, Belize Bird Rescue has 172 rescued birds in-house.

Starting as an act of love by Nikki and Jerry at Rock Farm in Roaring Creek, over the years the rescue effort became the Belize Bird Rescue Avian Rehabilitation Centre and Sanctuary, where they not only rescue and rehabilitate birds but also give birds a home if they can’t be returned to the wild because they can’t fend for themselves. 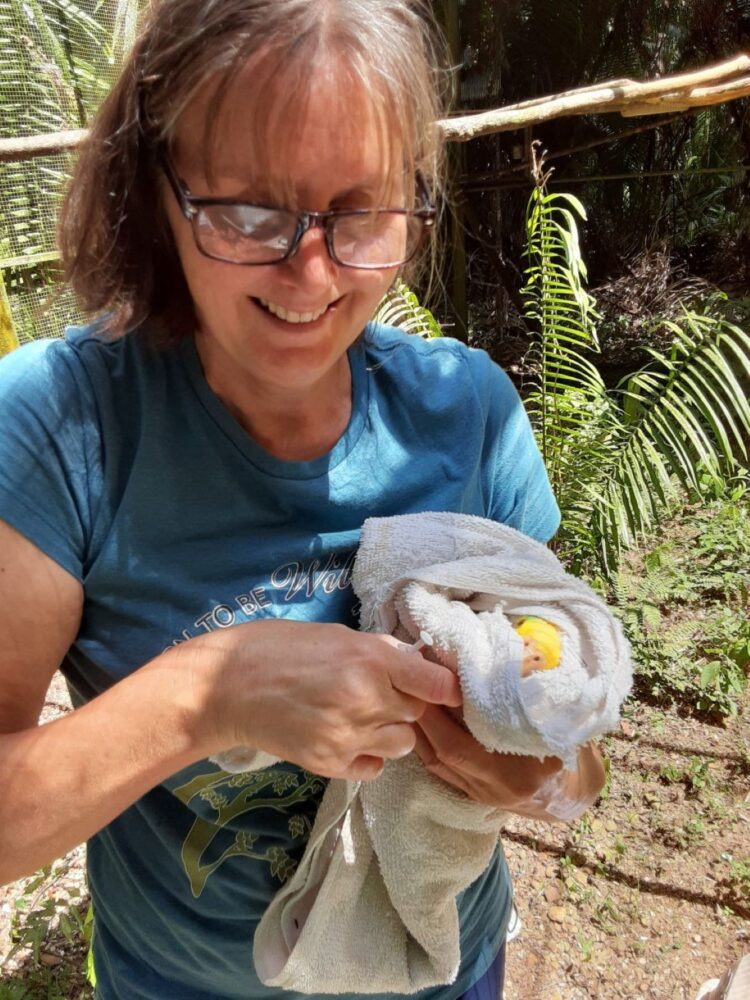 But though they deal specifically with birds, they’ll rescue any animal. If it’s not a bird, then they’ll find a place for it.

“We will rescue anything, anytime. We work with all species of wildlife as well,” she said. “So, we usually know the best place to take them to get the best care. So, anything wild that’s in trouble, we will help, even if we just have to give advice on the phone. We only work with the birds, but we rescue everything.”

Belize Bird Rescue networks with Wildtracks (‘They are the manatee and monkey people. They’re amazing people!’) in the northern part of the country and the Toledo Institute for Development and Environment (TIDE) (‘Mario Muschamp is our in-field guru!’) in the south. They also work with the Belize Zoo.

But all the work they do doesn’t come easy. Buxton said it takes about US$10,000 monthly to run Belize Bird Rescue.

“It comes from donations. We spend a lot of time fundraising online,” said Buxton.

She said before the COVID-19 pandemic they helped fund their rescue efforts by converting their home into a bed and breakfast, Roxanne’s Guest House, but they had to close it because of the restrictions. However, she said they depend a lot on donors. Several people who visited the guest house before the pandemic now send contributions.

If you’d like to help you can do so by going to the Belize Bird Rescue website where you can find all the details. Money helps for sure, but also in-kind, things like food also come in handy.

So, if you ever see a bird that has some type of problem, do call Nikki at 610-0400. She’s certainly going to take it in. After all, Belize Bird Rescue rescues about 320 birds yearly, that’s practically one bird per day.

As to Peachy-Rose, she might be at Belize Bird Rescue for a ‘little’ longer.

“We’ve had the bird just under a month now,” said Buxton. “If she regains her proper coloring and gets healthy, we can probably release her in two or three years.”