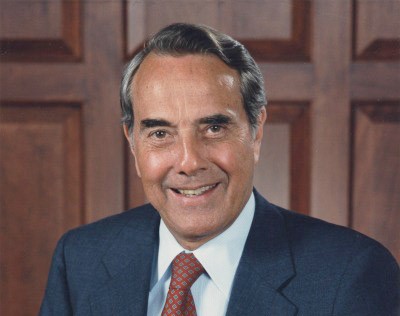 By Aaron Humes: Senator Robert Joseph “Bob” Dole, 98, died at home in his sleep on Sunday.

Bob Dole was a Second World War veteran, lawyer, Republican Senator and presidential and vice-presidential candidate, respected by both sides for his deal-making but unable to translate that to political leadership of his country.

According to the BBC Dole survived an assault on a German machine-gun post in northern Italy, recovering from near death to multiple injuries. An athlete and party guy in his college days, he turned to reading and the practice of law before beginning a half-century career in politics in the Kansas State legislature.

Stints in the House of Representatives and Senate followed, but a run in 1976 as mate to Gerald Ford exposed his key weakness: public speaking. He was guilty of repeated gaffes and blunders masked by his razor-sharp and occasionally self-deprecating wit.

After two aborted tries, 20 years later he would try again, against an incumbent in Bill Clinton who had the wind of the economy at his back and had not yet been engulfed in scandal. Dole lost gracefully and earned a country’s respect, retiring to become an elder statesman.

In 2019, Congress unanimously voted his promotion from captain to colonel for his service during World War Two. He accepted the honour gracefully, although he quipped that, “I was happy being a captain and it pays the same.”

Two years later – when Dole had been diagnosed with advanced lung cancer – newly elected President Joe Biden was one of the first to visit the veteran Republican at home. It was a mark of the respect in which Bob Dole was held on both sides of the political divide.

The President led tributes from both sides, calling Dole a “dear friend” and “an American statesman like few in our history”.

In Congress, Democratic House of Representatives Speaker Nancy Pelosi ordered the flags at the U.S. Capitol to be flown at half-mast in tribute.

The Senate’s Republican leader Mitch McConnell said Dole lived “the kind of full, rich, and deeply honourable American life that will be impossible for any tribute to fully capture”.