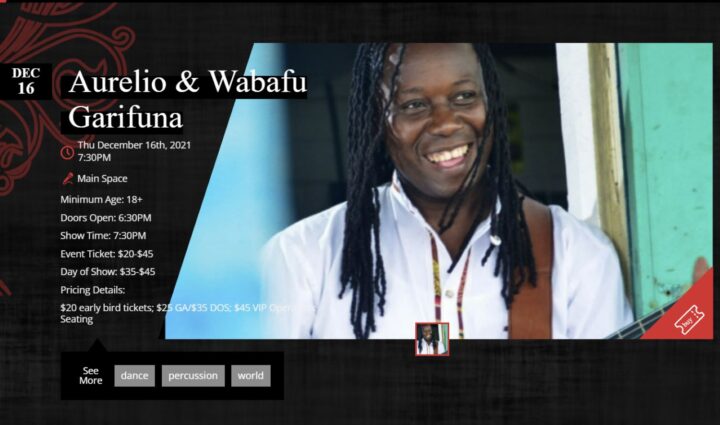 “Singer-songwriter, guitarist, percussionist, and political activist, Aurelio Martinez is one of Central America’s most gifted performers,” said Broadway World which goes on to say Martinez was born in Honduras into a family of talented paranda musicians.

“The artist is today known as the Cultural Ambassador of the Garifuna nation,” continued the article.

Aurelio along with Garifuna Soul, it said, has promoted Garifuna music during several international tours. Additionally, Martinez has produced four solo albums since 2004. His most recent work, Darandi, was recorded at Peter Gabriel’s Real World Studios in the United Kingdom in 2017.

The article explains that the Garifuna people are descendants of Amerindians and West Africans who live along the coasts of Belize, Guatemala, Nicaragua, and Honduras.

“While deeply rooted in the mix of African, Caribbean, and Latin sounds that make up the traditional repertoire of Garifuna music, Aurelio is carrying this rich culture into the future,” said Broadway World.

The show on December 16 at (le) Poisson Rouge will open with New York City’s Wabafu Garifuna Dance Company. This Bronx-based ensemble “is dedicated to preserving and sharing the rich Garifuna culture nationwide through live music, song, drama, and dance”.