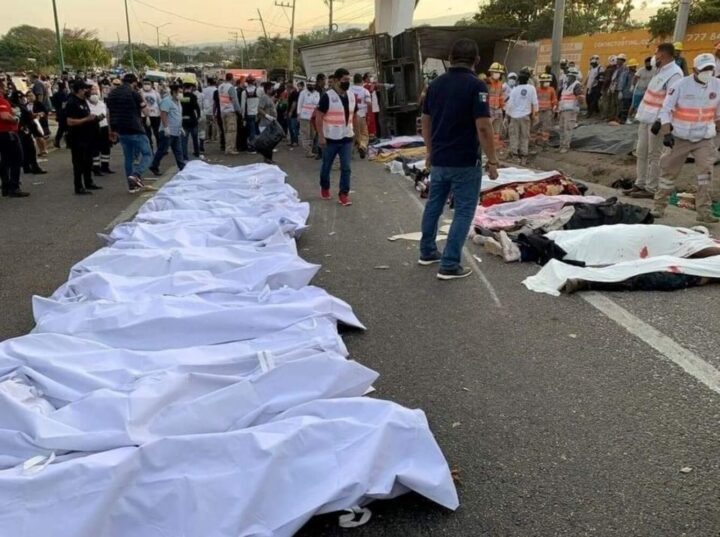 Forty-nine died on the spot and five died later while being treated at hospitals according to Rutilio Escandón, governor of Chiapas.

“We have 105 injured (83 men and 22 women) while we continue taking care of the injured,” said Escandón on Twitter. Escandón further said that they would determine responsibility according to law.

“Oh, God, I fell from the trailer. I don’t know how many we were. We were travelling in several groups, we were going to the North. I need help because everything hurts. I feel something on my skull. Oh, God, we flipped,” said Eduardo Cox, a Guatemalan migrant.

The accident happened at about 3:30 on Thursday afternoon on the road from Chiapa de Corzo to Tuxtla Gutiérrez, the capital of the State of Chiapas. Upon coming out of a curve the truck which was travelling at high speed flipped and the trailer carrying the migrants came loose crashing against a steel pedestrian crossing. Many migrants were thrown in the air and others remained trapped in the trailer said Televisa.

The majority of migrants were from neighbouring Guatemala, El Salvador, Honduras, and Nicaragua said Mexican authorities.

“My family is dead. We were travelling to the United States,” said Miguel Ángel Ortega.

The bodies of the dead could be seen strewn over the road. Emergency crews, firefighters, and ambulance personnel were insufficient in treating the injured, many of whom were taken to neighbouring hospitals.

Televisa reported that a number of migrants escaped so as not to be questioned by authorities who later said that they would grant the injured visas to remain in Mexico while they recover. A number of migrants reportedly asked to be sent back to their countries of origin.

Authorities had not been able to identify the driver who reportedly fled the scene.

The truck had left from the City of Comitán at 1:00 pm and had to pass three checkpoints, including an Immigration check, before it crashed. The migrants were reportedly travelling to Puebla.

“It’s very painful,” tweeted Mexican President Andrés Manuel López Obrador who lamented the accident and expressed solidarity with the family of the victims. 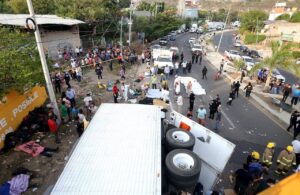 Mexico’s Foreign Minister Marcelo Ebrard said that the Mexican government was getting in touch with the embassies of the affected countries.