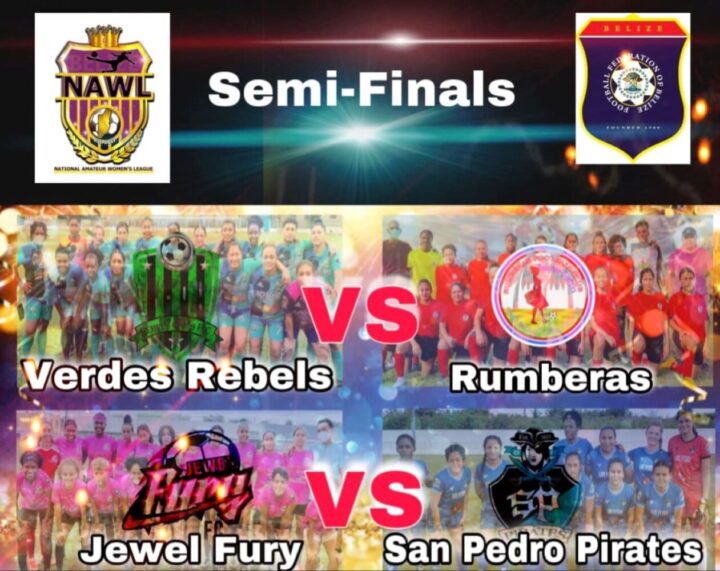 By Rubén Morales Iglesias: The Belmopan-based defending champions Jewel Fury and the Verdes Rebels Girls are the favourites in the Football Federation of Belize’s National Amateur Women’s League (NAWL) semifinals which will be played on Sunday in Belmopan and San Ignacio.

Led by NAWL’s topscorer, Jayda Brown, Jewel Fury take on the San Pedro Pirates led by Elva Nuñez at the FFB Stadium on Sunday at 3:00 pm in the one-shot semifinal match. Brown scored 15 goals in five games in the first round while Nuñez netted seven from four matches.

Jewel Fury topped the NAWL South with 15 points from five consecutive victories while the San Pedro Pirates finished second in NAWL North with seven points from two wins, a draw, and a loss.

The Verdes Rebels Girls from Cayo will clash with Bella Vista’s Rumberas in the other semifinal at the Norman Broaster Stadium in San Ignacio also on Sunday at 3:00 pm.

The Rebels Girls are depending on Shanay Nazario who scored 11 goals in four games in the first round to lead them to victory while the Rumberas are hoping Kaite Jones who found the net five times in four games is back to her old self.

The Verdes Rebel Girls won all four games for 12 points in NAWL North while the Rumberas were second in NAWL South with three wins, a draw, and a loss for 10 points.

The winners qualify to the NAWL Final which should be played the following weekend on December 18 or 19.