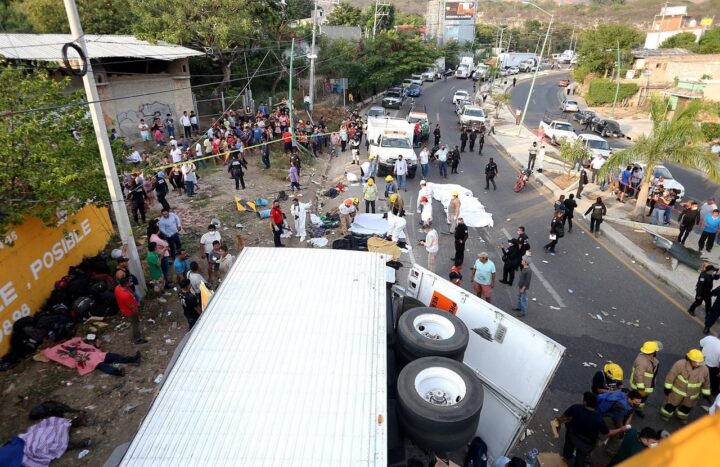 By Aaron Humes: Reuters reports that Guatemala is urging the United States to invest in it and Central America, while calling for a crackdown on people-smuggling gangs after dozens of migrants died in a truck crash in Mexico.

Mexican Foreign Minister Marcelo Ebrard said a regional “action group” had been set up to fight human-smuggling networks and was backed by the Dominican Republic, Ecuador, Guatemala, Honduras, Mexico, Nicaragua and the United States.

The group will “investigate, identify, learn, and bring to justice the leaders of the organization responsible for this human tragedy,” Ebrard told a televised news conference said Reuters.

Speaking alongside Ebrard, Guatemalan Foreign Minister Pedro Brolo Villa urged investment by Washington to alleviate poverty in the region and called for tougher penalties against criminals who benefit from illegal immigration.

“We invite the U.S. government to support development and investment in our country, as well as in neighboring countries, to avoid and ensure these tragedies are not repeated,” he added according to Reuters.

Brolo also proposed that the governments of Guatemala, Mexico and the United States organize a meeting soon to align and standardize their migration policies.

Each month, thousands of migrants fleeing poverty and violence in Central America travel through Mexico to reach the U.S. border. They often cram into large trucks arranged and organized by smugglers in dangerous conditions.

Late last week Breaking Belize News reported on the migrant crash that occurred outside the city of Tuxtla Gutierrez in the state of Chiapas. Survivors have said they were tightly squeezed together standing up in a small space. An unidentified Guatemalan man interviewed at the crash site said that when the truck driver tried to take a curve, the weight of people inside caused the vehicle to flip.

Also among the injured are three people from the Dominican Republic, a Honduran, a Mexican and an Ecuadorean.

The head of Mexico’s National Guard, Luis Rodriguez, said at a government news conference that the driver of the truck fled the scene and that the migrants on board told authorities they had entered Chiapas a few days before the accident took place.

Many stayed in the town of San Cristobal de las Casas in so-called safe houses run by people smugglers before boarding the truck on Thursday afternoon, Rodriguez said.

The truck was due to take the migrants as far as the central city of Puebla before they moved on, the government said.

Each month, thousands of migrants fleeing poverty and violence in Central America travel through Mexico to reach the U.S. border. They often cram inside large trucks organized by smugglers in dangerous conditions.

Many survivors of the accident, including Ciriaco Rodriguez, a Guatemalan who fractured his arm, said they got into the trailer to make a new life for themselves in the United States.

“More than anything it was to get to the American Dream,” Rodriguez told Reuters.