Prime Minister reaches out to domestic violence victims: ‘You did not do anything wrong. Your partner has no right to hit you…’ 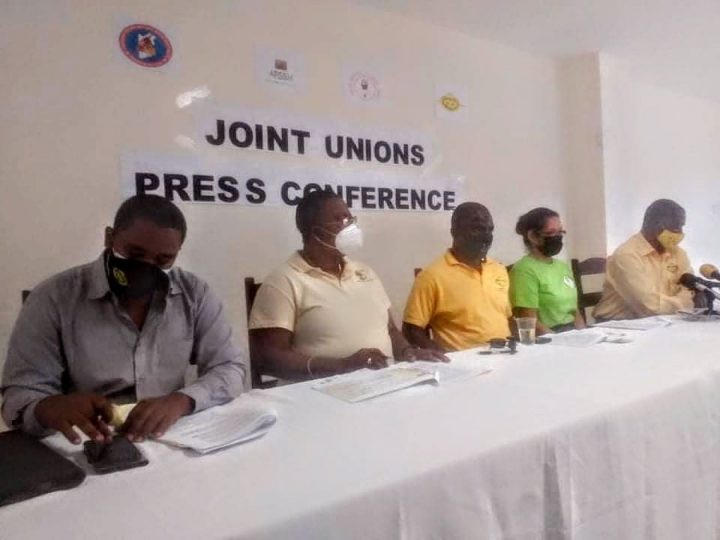 By Aaron Humes: A crunch showdown between the Government of Belize and the Joint Unions Negotiation Team over a potential reinstatement of the ten percent reduction in salaries for public officers and teachers taken last year has been postponed.

Following meetings today, the union leadership indicated that ahead of the next meeting on February 16, they would be looking at the information they had received from the Government’s negotiations.

President of the Belize National Teachers’ Union (BNTU), Elena Smith, said they had only gotten some of what they had requested and would ask for additional information to properly analyze the state of affairs, which the Government has committed to giving and she was suitably skeptical: “Well, I would not say we are satisfied, because you all know that we had requested a number of documents. And, we have to now review what we have today, based on what was presented and see, as I said before, exactly what is there. And so, we believe that there is more information we will need to properly assess the situation and determine where we are in relation to how we are doing.”

Public Service Union President Dean Flowers indicated the current fiscal position as ascertained from the Government’s figures and compared to the Budget suggests better performance than anticipated, but said they would have to dig deeper: “You can look at a historical perspective, in terms of how those numbers were on both the revenue and expenditure side and see if where we are is as a result of growth, or recovery, or prudence in our tax collection and spending. You can look at it from that perspective and do an analysis and say is this as a result of good fiscal management or is this as a result of under budgeting… But, just on the surface of things, the budget is well on course in terms of achieving a balanced budget.”

Flowers added that the repeated supplemental appropriations are particularly concerning: “I want to state, of course, we had some observations and we were not too pleased when we looked at some of the supplemental that were passed. There are additional supplemental we understand are expected to be passed before the fiscal year is out. Those things do impact on the economic situation of the country and on the budget as it relates to the commitment that government made to public sector workers. And so, we just have to wait and see how that conversation goes on the sixteenth of February, and taking into consideration the additional information that has been promised.”

Earlier, Prime Minister and Minister of Finance John Briceno told reporters that if Belmopan has got it, the workers will likely get it: “I know that the unions, rightly so, are looking how they can get back, if not all, at least a portion of the ten percent that we had to cut because we did not have the money. So, if we can, we will hope to do that. We are partners in this together. The success of the PUP government is simply because the unions, and the public service, and the teachers, they are all cooperating for us to get where we are.”

He added that national economic growth is leaps and bounds ahead of the International Monetary Fund’s prediction of 2 percent, coming in at around 15 percent after a contraction of slightly more than that in 2020. This he attributed to immediate measures including the retirement of the Superbond and subsequent reduction in national debt and loosening of policies that promoted employment.