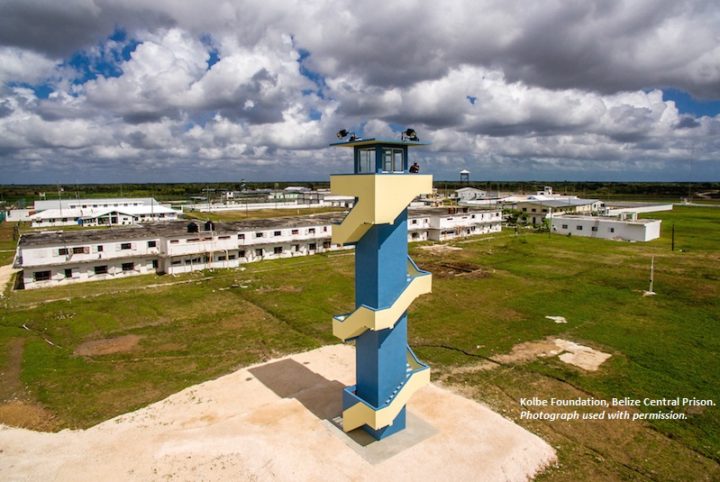 The views and opinions expressed in this article are those of the authors and not necessarily those of Breaking Belize News.

This article was originally published by Amu Edge:

In November 2021, I was invited to Belize by the Kolbe Foundation’s CEO, Virgilio Murillo, to provide comprehensive training to the 240 staff members of the Belize Central Prison. Joining me on the trip was Advanced Practice Nurse Practitioner Brent Davis who works at a local doctor’s office in Southwest Florida where he provides anesthesia for patients that are undergoing procedures.

Also joining us was Atticus Frank who works in the field of finance for a large valuation and financial advisory firm in Southwest Florida.  The three of us came together through Grace Community Bible Church, which promoted and supported the trip.

The training we provided included:

Atticus also worked with the prison’s CFO to offer any analytical or budgetary assistance possible and provided financial literacy training to the prison managers. This event was the first time that Belize Central Prison staff had received formal training in these areas. It also reflects the importance of international collaboration in the field of criminal justice.

Background of Belize Central Prison and the Kolbe Foundation

The Belize Central Prison is the only prison in the nation of Belize. Prior to 2002, there were

deplorable conditions in the prison. Corruption and escapes were rampant, unsuitable living conditions existed, and juveniles were housed with adults, fostering the risk of exploitation.

In 2002, a non-profit faith-based organization called the Kolbe Foundation took over the prison’s management from the government. Since then, Belize Central Prison has developed a highly effective rehabilitation program for inmates.

For instance, the Kolbe Foundation created training opportunities for inmates to learn useful work skills that they can use after their release. It has also implemented faith-based initiatives to foster a change in the inmates.

These faith-based initiatives include church services available seven days a week and a 90-day faith-based rehabilitation program called ARC. There is also a Christian radio station that is played throughout the prison; it includes testimonials from former and current inmates who have turned away from a life of crime.

As the result of the changes implemented by the Kolbe Foundation, Belize Central Prison now has an extremely low recidivism rate of around 10%. To put that into perspective, the recidivism rate in the United States is as high as 76.6%, according to the Harvard Political Review.

Brent Davis provided in-depth training on basic life support techniques. He taught prison officers how to perform CPR in an emergency, respond to someone choking and respond to other medical emergencies that need rapid intervention.

Belize Central Prison officers then had the opportunity to practice their newly learned CPR skills on mannequins provided to the prison. The mannequins were donated to the prison by a local fireman in Southwest Florida to assist with the training. Jarrod described the proper response to a shooting victim and how to use a tourniquet to control bleeding in these types of emergencies.

In addition,  Brent gave a presentation that detailed how to treat someone who is unresponsive. Officers could then ask questions and were shown examples of how these skills could save someone’s life at the prison or in the officer’s personal life.

Prison work is notoriously dangerous due to the potential for the officer to undergo physical harm. To protect Belize Central Prison officers from future harm, we offered self-defense training and taught them tactics to prevent a violent inmate from overtaking them.

These tactics were designed to keep both the officer and inmate from getting hurt. When used, they will also buy more time for additional officers to arrive on the scene and subdue an attacker.

Providing feedback on an officer’s self defense training. Image courtesy of Jarrod Sadulski.

For chemical irritant training, we provided Belize Central Prison with classroom instruction on the proper use of a chemical irritant (pepper spray) on a combative, violent subject. This classroom training covered important safety factors that should be considered before, during, and after the deployment of pepper spray.

Our training was based on practices that are in place within the international law enforcement community. It also included guidance from the United Nations Human Rights Guidance on Less-Lethal Weapons in Law Enforcement.

Following the classroom training, we placed prison officers in a real-world scenario simulating an attack. When pepper spray is deployed in an environment, it is likely for everyone, including officers, to feel its effects, so officers must be properly prepared.

Closeup of an officer being sprayed with pepper spray. Image courtesy of Jarrod Sadulski.

Once they were exposed to pepper spray, Belize Central Prison officers had to defend themselves against an attack by role players who approached the officers with cushioned shields. This strategy enabled those officers to understand the physiological effects of pepper spray and how to defend themselves if they are attacked after exposure. The officers were also taught proper decontamination techniques to get rid of the spray’s effects.

In addition to life support, self-defense, and chemical irritant training, we taught prison officers other useful skills such as proper handcuffing, safely escorting combative inmates, and safety measures when working with inmates. The training was collaborative, and many of the prison officers had the opportunity to provide their input throughout the training.

Belize and the US Can Learn Mutual Lessons from Each Other

The Kolbe Foundation has successfully developed a culture of calmness within the prison through these programs and provides meaningful, job-related skills training to keep inmates from committing more crimes in the future. In fact, the rehabilitation programs have proven so effective at Belize Central Prison that some of the current prison officers are rehabilitated former inmates.

A lesson that Belize Central Prison can learn from the United States is to provide certification training. Certification can be used by former inmates in their search for employment after incarceration; a certificate also proves to prospective employers that an inmate has learned a trade skill while in prison.

It was a privilege to support the efforts of the Kolbe Foundation through providing this training at Belize Central Prison. These visits built on our previous training on riots, escapes and hostage-taking situations and will continue in the future. Anyone interested in learning more about training opportunities at the Belize Central Prison is welcome to reach out to me at [email protected].

Dr. Jarrod Sadulski is an associate criminal justice professor in the School of Security and Global Studies and has over two decades in the field of homeland security. His expertise includes human trafficking, maritime security and narcotics trafficking trends. Jarrod recently conducted in-country research in Central and South America on human trafficking and narcotics trafficking trends and was the guest of INTERPOL in Colombia. Jarrod can be reached through his website at www.Sadulski.com for more information.