‘Census 2022 is on track to begin in May,’ says Statistical Institute of Belize 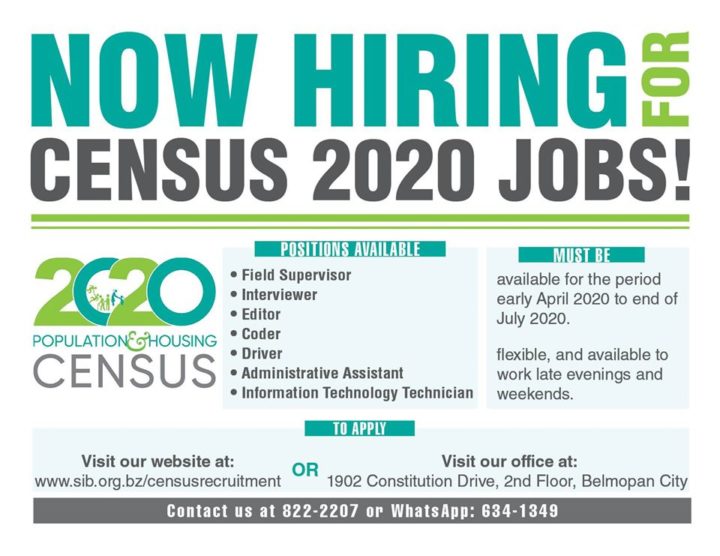 By Benjamin Flowers: The Statistical Institute of Belize (SIB) will be hiring over 1,000 additional people to assist with the upcoming Population and Housing Census, scheduled to begin on May 12, 2022.

Acting Director-General of the SIB Diana Castillo-Trejo explained that the SIB is taking on a wide variety of additional staff, but the bulk of the total will be interviewers and field supervisors.

“These are our frontline people, so to speak. They are the ones who will actually be going out into the field, interacting with the households, and collecting the data,” Castillo-Trejo said.

The SIB is also recruiting administrative staff to assist in the district offices in the six districts, plus two additional offices in Belize City and one in the Cayo district. Other positions to be filled during recruitment include Information Technology Technicians, who will be needed to provide technical support, particularly to districts as the census is being done entirely on tablets, editors and coders for when the data starts coming in, and drivers.

The SIB’s recruitment teams have been conducting interviews for the past 5 weeks, and have run into some difficulties due to the pandemic, with many people being unable to show up for their interview due to quarantine. Castillo-Trejo says that the last of the in-person interviews are to wrap up early this week, before the SIB goes into a round of virtual interviews, and then into training for those who made the team.

The census, which collects data on the country’s population size, ages, ethnic composition, and other important data, is being held under the theme “Count me in.”

Originally scheduled for May of 2020, the Government of Belize announced in March that year that the census would be postponed due to the arrival of COVID-19 in Belize. It would again be postponed in February of 2021, also due to the pandemic.