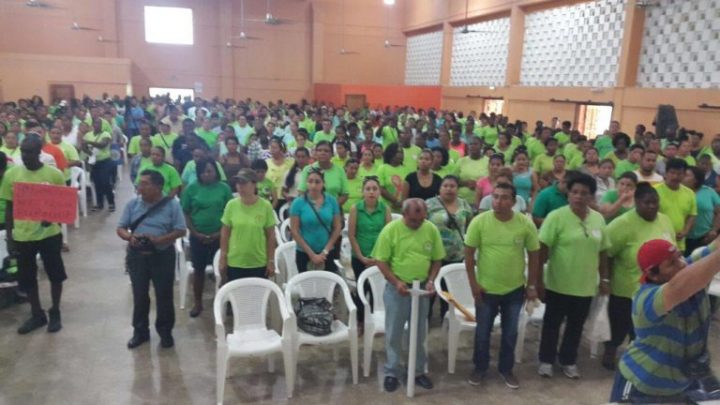 By Aaron Humes: At its regular meeting this past Saturday, the Belize National Teachers Union (BNTU), through its Council of Management, voted unanimously to support the Christian Workers’ Union (CWU) in its ongoing dispute with Port of Belize Limited.

But more than that, the Council voted to “withdraw all our Union’s accounts, those of both National and Local Branches, from the Belize Bank Limited.”

While the Port is in receivership, the company managing it – Waterloo Enterprises Limited – is widely believed to have ties to Lord Michael Ashcroft, chief shareholder of both Belize Bank Limited and Belize Bank Corporation Limited (formerly ScotiaBank Belize).

The CWU complained a few days ago that after its $1.5 million windfall from Government (or at least that portion which had not already been given out to stevedores) was frozen in its account at the National Bank of Belize Limited, at least one other major bank effectively declined to do business with them over concerns of handling, potentially, the frozen money. (The Belize Bank, we can confirm, is not the bank in question).

Nonetheless, the BNTU says it “has seen and heard the issues being faced by the Union, its President and its members and wish to place on record our total condemnation of what we feel amounts to no less than a bold attack on Trade Unionism, as a whole, in our country.”

It calls on fellow unions and the National Trade Union Congress of Belize to join them and “to fully consider the dire implications that the court cases against the CWU can have on all of us, as Trade Unions. The trumpet call of unionism is, ”Touch One Touch ALL,” and therefore the time to come to the aid of our sister union is NOW,” it states.

Teachers will be consulted in the coming weeks for talks on further action, as the Union concludes, “The Trade Union movement is arguably one of the most important pillars in our democracy as a young nation, and we will not stand idly by and allow any individual, or entity to trample or try to destroy its existence.”

The CWU for its part faces a hearing on an application for an injunction of the Government’s payment on the basis of lack of consultation with the National Assembly this Wednesday, and a forthcoming lawsuit over its strike action in January.