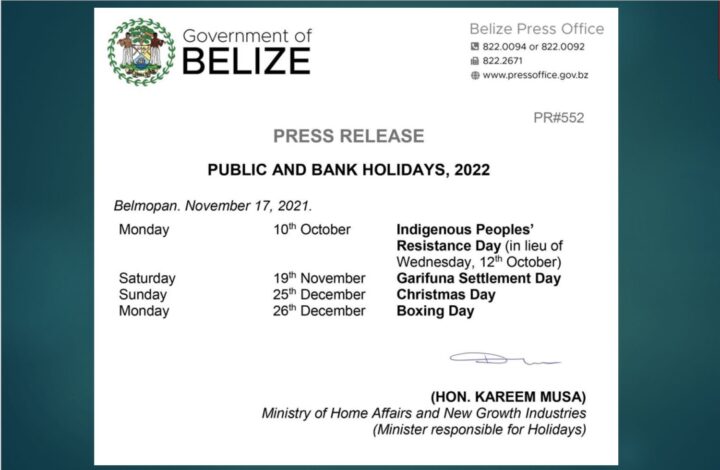 By Hugh O’Brien: Some Belizeans are asking if this coming Monday (May 23) or Tuesday (May 24) is officially a holiday in celebration of Commonwealth day. However, readers may recall that on November 3rd, 2021, the Government of Belize released the official list of Public and Bank Holidays for the year 2022, and that Commonwealth day or Sovereign’s day was officially removed from the list of holidays.

The Government of Belize issued a press release earlier today to clarify that there is no public and bank holiday next week.

Back in November 2021, Government also removed Pan-American Day or Columbus Day from the list of holidays, but on the day it was celebrated (ie. October 12th), a new holiday known as El Día de la Raza was put in place. El Día de la Raza (Day of Race/Race Day) celebrates the heritage, colonization, and cultural diversity of Latin America. It is observed in a number of Latin American countries and is viewed as a celebration of the Hispanic heritage of people in the region.

However, shortly after the Minister of Home Affairs Kareem Musa said that the October 12th holiday was of October 12th holiday was erroneously named and was corrected to Indigenous People’s Resistance Day. At that time Musa explained that “All of Cabinet, unanimously, agreed that the proper name for October twelfth should be Indigenous People’s Resistance Day, to acknowledge, to recognize the survival, the struggle, and the resistance of indigenous people in Belize, in particular the Mayas.”