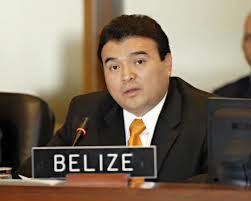 Saturday, July 18th, 2015. BMG: Belizean diplomat Nestor Mendez is now the second-highest ranking man in the Organization of American States (OAS), accepting the post of Assistant to Secretary General Luis Almagro of Uruguay in special session in Washington on Friday after being elected four months ago. Mendez, until recently Belize’s Permanent Representative to the OAS and Ambassador of Belize to the United States of America, spoke to his colleagues, committing to transparency, equity and unambiguous policies.

In Spanish and English, Mendez outlined his plans for the next five years, to 2020. The cornerstone of those plans is what he termed “partnership for development,” cross-disciplinary interventions organized by the OAS and other institutions of the Inter-American system with permanent observers to the OAS and other interested institutions.

He made note of ongoing economic issues and the reintegration of Cuba into the region – appearing at the Summit of the Americas and reestablishing diplomatic relations with the U.S.

According to Mendez, the key thematic areas he will focus on during his tenure are: regional inter-connectivity, particularly in the Caribbean covering ICT, energy and transportation; promoting private sector involvement in economic development; attacking the issue of climate change and natural disasters; fulfilling the pledges made at the summit processes in a joint summit working group; youth development in the areas of engagement and research and study; developing the staff of the general secretariat, and finally, expanding the scope and work of the national offices in each OAS member state.

He thanked Foreign Affairs Minister Wilfred Elrington, Prime Minister Dean Barrow and the Government and his family for their support.