Why Petrocaribe is good for P.G. 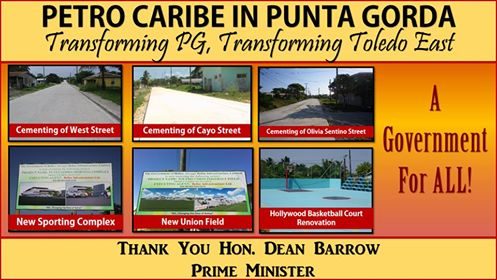 Monday, July 20th, 2015. By Chrisbert Garcia: PetroCaribe funding has been “rolling” in Punta Gorda Town since West Street was cemented early last year by the current Mayor, Fern Guttierez and UDP Standard Bearer Peter Eden Martinez. These controversial monies have continued to be used for infrastructural development as well as ‘cheer’ projects in PG and the Toledo District on a whole. 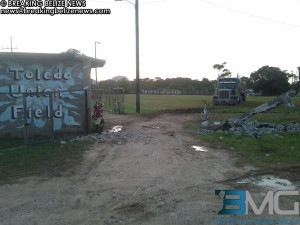 Recently, the Hollywood area basketball court was given a $30,000 facelift; Cayo Street in the Indianville area was cemented; the Olivia Sentino Boulevard is in the process of being cemented and now one of the biggest projects to be undertaken has begun. That is the upgrading of the Toledo Union Field to a state of the art facility that will be able to seat massive crowds and improve playing conditions even in rainy weather.

The project began a few weeks ago after Belize Infrastructure Limited received the contract to carry out this enormous task that is expected to make the field look like the one on a diagram posted outside its fence. It is unclear how long the project will take but the closing of the facility from the public along with demolition of the sporting complex, caused serious displeasure by residents. 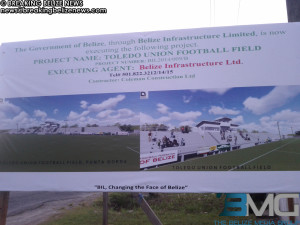 Late last year, the Punta Gorda Sporting Complex, the most popular basketball court and venue for town events, was demolished without the knowledge of the mayor at that time. It brought down heavy criticism on the UDP standard bearer who promised that a multi-million dollar building would be reconstructed through PetroCaribe Funds. That reconstruction has not begun as yet but the commencement of the Union Field’s upgrading seems to have given hope to the residents of PG.

Aside from the infrastructural work, PetroCaribe was also used to throw the biggest mothers’ day celebration the town has ever seen, with more than 200 mothers attending and receiving gifts to take home. PetroCaribe works also expand throughout the boundaries of the Toledo District, as countless roads have been upgraded in villages like Trio, San Isidro, Bladen and Bella Vista, paired with summer programs being executed for the youths.

Saying “PetroCaribe” is as bad as saying a “cuss” word to some people, but the fact of the matter is that not only in 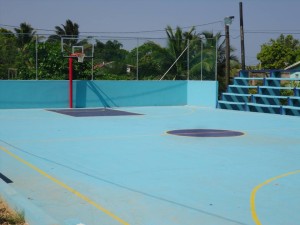 the Toledo District where I live, but all across the country, thousands of Belizeans are enjoying the fruits of these monies. It all comes down to one question: should our government borrow millions of dollars and squander it, knowing that the Belizean people will eventually have to repay the debt, or borrow millions of dollars and put it to good use?

No matter what political party you are affiliated with, the development brought through PetroCaribe is undeniable. Yes, we will have to repay the massive amount of money being borrowed, but it’s like getting groceries from the store and paying the bill at the end of the month, since we can see clearly how the money is being spent, even if it is on ‘pibil’ and bus costs for the sake of family bonding.