Police in Roaring Creek find over 1000 grams of weed 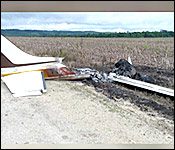 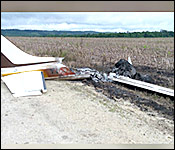 The single-engine Cessna 210 was heard circling over the village without lights but it did not crash and no one appeared to have died. The aircraft is unrecognizable and all police can say it that it was used for drug transports to Guatemala.

Any drugs inside were likely transferred before the plane was burnt to dispose of evidence. An active investigation is underway, as police suspect local help.

More than a year and a half ago a similar plane was found about a mile away from Tuesday’s landing site, similarly burned. A helicopter landed unharmed in the Blue Creek area of Orange Walk a few months ago and has been claimed by Government, while a mysterious plane landed at the Municipal Airstrip a few weeks ago and has not been claimed.