Belize, Mexico and Honduras have issued phase two advisories of an approaching Tropical Storm within the next 48 hours 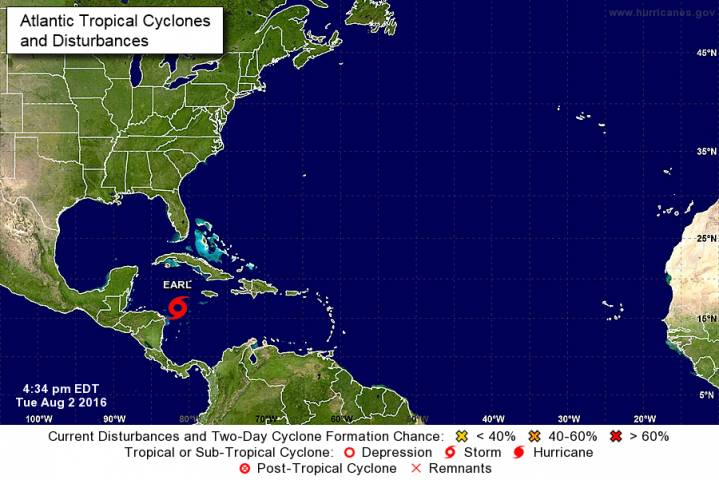 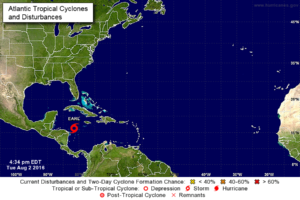 By BBN Staff: Late this evening tropical storm Earl is expected to strengthen and possibly become the first hurricane in the Atlantic Ocean as the system nears the coast of Belize and the Yucatan Peninsula by early Thursday.

According to the National Hurricane Center in Miami, Earl is expected to pass just north of Honduras Bay Island on Wednesday afternoon and then draw into Belizean waters on Wednesday night into Thursday.

At 4 p.m., the center of Earl was about 200 miles south of Grand Cayman and moving generally westward at nearly 16 mph. Forecasters expect that general motion to continue through Thursday.

Mexico and Belize are predicted to experience hurricane forces.

The fifth named storm of the 2016 hurricane season, Earl formed in the northwestern Caribbean Sea on Tuesday morning, with maximum sustained winds of 45 mph.

Maximum sustained winds Tuesday afternoon neared 50 mph with higher gusts, according to the center. Tropical-storm-force winds extended up to 90 miles north of the storm’s center.

Earl is expected to dump a total of 8 to 12 inches over parts of Belize, Honduras, Guatemala, and the Yucatan Peninsula. Some areas of Mexico and Belize could get 16 inches of rainfall.

The National Hurricane Center is issuing advisories for life-threatening flash floods and mudslides.

A storm surge of 2 to 4 feet is expected along the coast of Belize and the eastern Yucatan Peninsula to the north of where Earl’s center makes landfall.