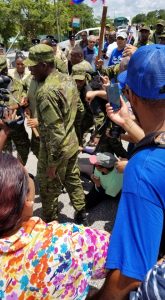 The release says that the Maya leaders and the Toledo Alcaldes hold sacred the belief in human rights and fundamental freedoms of all Belizeans.

“Therefore, it is very much concerned with the treatment and response of the Government in respect of a female press officer, Ms. Marisol Amaya.  The Government of Belize at the 2013 Universal Periodic Review before the United Nations stated that respect for human rights and fundamental freedoms … was a cornerstone of the State’s domestic policy. Therefore, the MLA and TAA urge the Government to uphold its obligations to respect the human rights of all Belizean,” the release states.

The MLA and TAA join the voices of Belizeans to condemn the excessive use of brute force by the Government of Belize, through its police forces, against Belizeans who were expressing their fundamental freedoms, it said.

Both organizations say it seems almost intentional that Amaya was singled out and clearly targeted as no other male press officers were treated in the same manner.

“It seems that there is a strong pattern by the government’s police forces to single out and target female press personnel and members of civil society advocates. It must be recalled that this is not the first time that Ms. Amaya has been targeted by officers of the government and there was the aggression against Ms. Yaya Marin Coleman and human rights Maya activist Ms. Cristina Coc,” it further explains.

The Maya people strongly urge the government to make good its acceptance to recommendations made by other countries of the United Nations (Universal Periodic Review 2013) in support of human rights and fundamental freedoms. Belize accepted the recommendation of Ireland to investigate all cases of violence against women, punish perpetrators and ensure that victims receive the necessary support and compensation, the organizations added.

The organizations say that this recommendation, accepted by Belize, is well applicable to the recent case involving Amaya.

They call upon civil society to increase its monitoring and reporting of Belize’s compliance under international human rights treaties that it has voluntarily accepted.