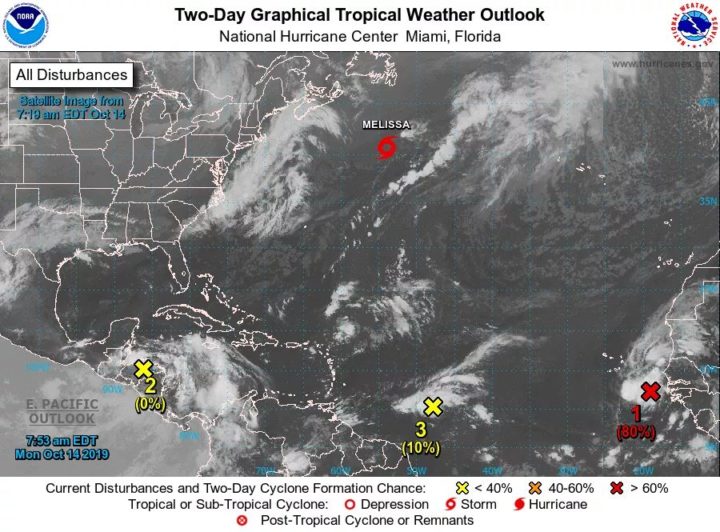 By BBN Staff:  The National Hurricane Center (NHC) is monitoring 3 systems in the Atlantic Ocean.

There is a 90 percent formation chance for a large low pressure system located over the far eastern tropical Atlantic Ocean less than 300 miles southeast of the Cabo Verde Islands.

According to the NHC, the low has become better defined since yesterday, and shower and thunderstorm activity is showing increasing signs of organization.

If this trend continues, a tropical depression or tropical storm is likely to form later tonight or early tomorrow morning.

This system is forecasted to bring heavy rainfall and gusty winds to parts of Cabo Verde islands.

The second system being closely monitored has a low chance of formation over the next few days.

Disorganized showers and thunderstorms over the southwestern Caribbean Sea, Gulf of Honduras, and parts of Central America are associated with this broad area of low pressure located inland over northwestern Honduras.

It is forecasted that this system will move west-northwestward across southern Belize, northern Guatemala, and southeastern Mexico during the next couple of days, preventing tropical cyclone formation during that time.

Regardless of development, this system is expected to produce heavy rains over a large portion of Central America during the next few days, which could cause flooding and mudslides, especially in mountainous areas.

The third system that the NHC is monitoring is a tropical wave accompanied by a small low pressure system located over the central tropical Atlantic.

This tropical wave is producing a large area of cloudiness and thunderstorms.

Although thunderstorm activity has continued to increase and become a little better organized since yesterday, upper-level winds are expected to be only marginally conducive for significant development of this system over the next day or two while it moves westward at around 15 mph.