Restaurant shooter guilty of use of deadly means of harm 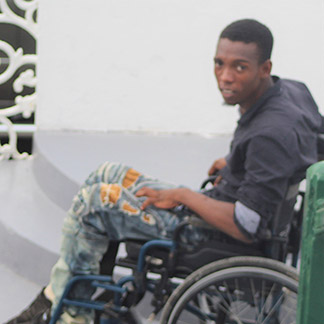 By Aaron Humes: On the eve of his 30th birthday tomorrow, Thursday, Aspinall Welch, Junior, was convicted by majority of use of deadly means of harm with intent to cause bodily harm by a Supreme Court jury.

The nine-member jury before Justice Marilyn Williams deliberated from 3:52 p.m. this afternoon until 5:50 p.m. when they announced a guilty verdict by seven votes to two.

But arcane court rules meant the court could not accept the verdict if it was rendered less than two hours from time of deliberation, so the judge sent the jurors back to the deliberating room.

They entered at 5:55 p.m. and were back out exactly one minute later and over the two-hour time limit, their verdict unchanged.

On November 21, 2012, Welch was accused of storming into the iconic eatery Dit’s Restaurant on King Street and opening fire on 48-year-old Nelson Fitzgerald Young, who dodged as many as five gunshots.

Welch himself was shot three years ago and left paralyzed, using a wheelchair. Today two security guards employed with SOS Security Services assisted him up the long stairs of the Supreme Court.

Prosecutor Senior Crown Counsel, Sheneiza Smith, called five witnesses to the stand including the target, Young, and there was a visit to the scene of the incident before the case was closed on January 23.

Young told the court from the witness stand that around 1:00 that afternoon, he was eating with friends at the restaurant when he got a call. He was on his way to the single entrance-exit when he came face-to-face with a man who was armed with a .38 revolver.

The gunman pointed the gun at him and Young said he grabbed his hand which held the gun and elbowed him twice to the chest.

The gunman fell over a table in the restaurant and hit the ground, allowing Young to run for cover and get out his own licensed weapon.

The shooter then fired 2 shots at him as he ran to the other side of the wall inside the building in keeping cover. The shooter missed and Young peeped out and saw his foot and shot at him. That shot caught him in his ankle. The shooter fired three more times unsuccessfully, and then Young came out and held his attacker at gunpoint until police arrived and took him into custody.

Young identified an unrepresented Welch in court, but he denied the charge and told his version of events.

He says he was sent to buy a slice of cake at the restaurant known for its pastries, and as he entered he spotted a young man he knew only as Trevor, walking in with a firearm and approaching one of the restaurant’s patrons.

Welch claims he stood back and witnessed this man point a gun at the head of his target; they struggled and he, Welch, turned tail to run as he heard shots fired. After he exited the restaurant, Welch said, he then realized he had been shot in his foot.

Welch is to be sentenced on Wednesday, February 19 and will wake up on his birthday at the Central Prison in Hattieville.