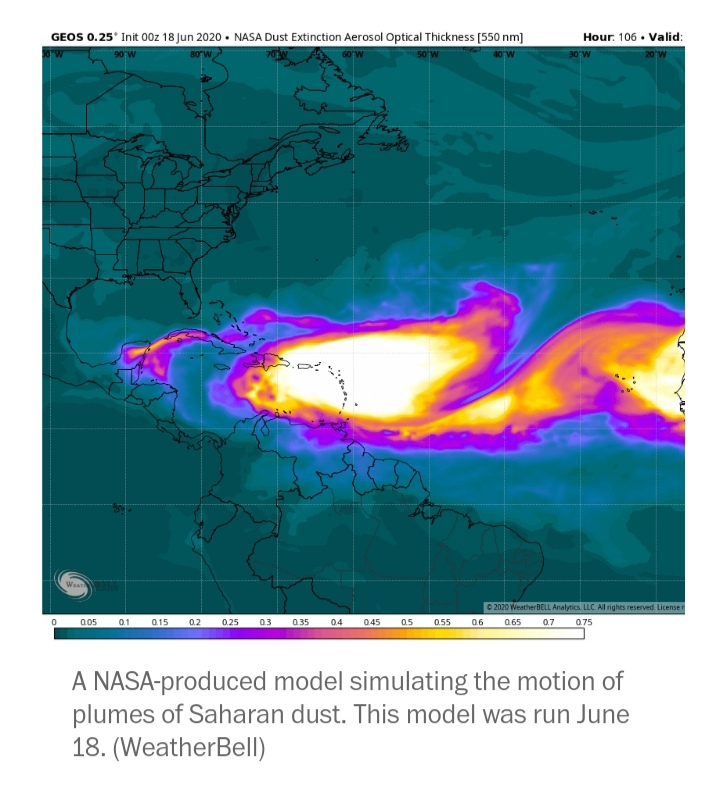 By Aaron Humes: A plume of dust from the Sahara Desert in north-central Africa is expected to arrive in the upper Atlantic Ocean, the Caribbean Sea and the Gulf of Mexico by Wednesday.

According to CNN, while such plumes are fairly common even in hurricane season, this one is dense enough to obscure the African coastline on satellite imagery.

Forecast models call for this swath of dust, straight from the Saharan Desert and carried by the east-to-west Trade Winds, to arrive in the Southeast US beginning on Wednesday of this week, according to CNN.

It will put a pause, at least for now, on tropical storm activity in the region, as the dry air removes the humidity hurricanes need to form. This year’s hurricane season is expected to be above average and at least three named storms and one hurricane have formed even before the season officially started earlier this month.

The typical blue sky for this time of year will have more of a milky haze as the tiny dust particles, tens of thousands of feet in the air, scatter the sun’s rays at dusk and dawn providing for visually arresting sunrises and sunsets.

Unfortunately for those with sensitive allergies, some of the particles will make their way to the ground and aggravate those allergies in some areas.